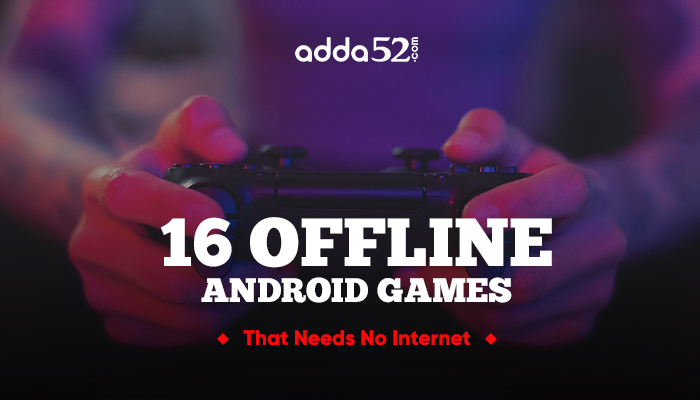 In the era of technology, it won’t be wrong to say that the internet has made our life easy and happening. We no longer have to stand in a queue to submit our electricity bill or have to hustle in the crowd to lay our hands on the best apparel. All thanks to the internet as it has touched all the aspects of our lives and makes it more entertaining than ever. Now it seems that the absence of the internet would have made us cut-off from the rest of the world.

But have you ever thought about what you do without an internet connection? Suppose you are stuck in a location with poor network connectivity, how will you entertain yourself in such a situation. You can’t even play online games on your smartphone as a lot of android games require a data connection to operate. For the smooth running of the online games, it is imperative to stay within the proximity of a web connection.

So what will you do? Don’t panic! In this article, we are providing you the best offline Android games that are packed with amazing specifications.

Do download some of these games on your phone to keep yourself entertained round the clock, without any dependency on the internet.

Below mentioned are some of the best Android games that don’t require WiFi or a mobile data connection!

It is one of the latest offline games in which you don’t need WiFi. It is a runner and a snowboarding video game where players ski down multiple slips, make various jumps, and invade various obstacles and enemies to collect coins. The best part is that the game is free with advertising. Players can choose to pay to remove the ads or buy coins to unlock customization elements.

This game will take you through various locations including dunes, temples, and canyons. The more you play, the more amazing features you will unlock. The game follows a progression gameplay style. Players have to clear three challenges to progress to the next level. After every 10 levels, you will unlock new characters. The game is similar to Alto’s adventure, the only difference is the new environmental elements. This mobile game is easy to play and gives you a sense of discovering something new with every level!

Crashlands is among the best offline mobile games for Android. In this game, you will find yourself on a planet with no way off. All you have to do is to create a base, defeat the main bad guy, utilize stuff to craft items, and escape to win. In the way, you will come across various creatures.

To deal with them, you are required to build a shelter, save yourself by using weapons, and collect items. You will find a lot of self-managing inventory and stuff to craft, and tongue-in-cheek humor to keep you entertained throughout the gameplay.

This game is also one of the free to play offline mobile games for Android. This fun-to-play game is very addictive and offers over 150 collectible game characters, local and online multiplayer (in case you wish to play online), offline support, and much more.

The goal of this game is to save yourself from obstacles such as cards, trains, rivers, etc. as much as possible without dying. Players have to pass these obstacles without taking much time. The score will be the numbers you walk forward. With different characters, you will get different places. For instance, if you get the penguin, you will get a snowy place.

This game is one of the best open-world games that players can enjoy playing offline on your Android. The story revolves around the life of Carl Johnson who had escaped Los Santos, San Andreas – a city full of violence, crimes, corruption, and much more. Now he has to come back because his mother has been murdered and his friends are heading towards disaster. He has to save his family and friends. Taking the ‘open-world’ aspect of this game into consideration, GTA San Andreas outweighs all other games in this genre.

Offering a massive open-world to the players to roam around, the game will keep you hooked for hours. Explore the open-world while enjoying the high-resolution graphics, designed specifically for mobile. The game is easy to play with dual analog stick controls for full camera and movement control.

Launched in 2014, this game is one of only a few freemium RPGs that need no internet connection. You can play the game offline, run around, sling magic, kill bad guys, and explore various ruins and dungeons. There is no need to connect to a server to play this game. Just ensure that the latest content is downloaded.

If you love horror and action-packed games, then this horror-puzzle game is meant for you. In the offline version of the game, you play with offline bots who give you a feel of a multiplayer match. You play as Jason Vorhees, slaughtering the way across over 100 levels. The objective is to slaughter all the people (offline bots) while avoiding the cops, traps, land mines, and much more. The presence of horror and gore elements make the game more exciting and thrilling.

This single-player offline game is the best way to stay entertained when you don’t have a wifi connection. The goal of the game is the same as its predecessors in the Bloons TD series. Players are required to set-up tower defenses to fight off waves of bloons. The game features twenty maps, five levels of upgrades, heroes, and 19 towers, each comprising three upgrade paths.

It is an old-school adventure game that comprises a lot of advanced and modern features. In this game, you will find a sweet story from multiple characters and different perspectives. The game has some nice riddles to make the gameplay happening and humorous for the players. Play this game while traveling or when lazing around at home, the choice is all yours. You can easily play the game with one finger and enjoy a thrilling time without any internet connection.

In this game, players have an open-world sandbox where they have to create and survive to win. Play it to create innovative mechanisms or choose the survival mode to defend against enemy mobs, the choice is all yours. You will get lots of weapons, items, blocks, and much more to create or survive.

If you want to play the game with your friends, you have to choose the online version. But if you wish to play alone and have no or poor internet connection, you can try this pocket edition.

Once Upon a Tower:

This offline game showcases the classic fairy tale of the princess who is locked at the top of the tower and guarded by a dragon. But wait, the storyline is quite different and interesting. Instead of waiting for her prince charming to rescue her, this princess is fearlessly taking efforts to make her way out.

This game gives an empowering message to all the women that you are capable of beating your enemies in the game as well as in real life. Collect power-ups and coins to progress to the levels and smash up all the monsters and creepy crawlies coming your way.

You must be thinking about how you can play a game like a street fighter against real players unless you are online. Of course, the point is valid, but you can enjoy the arcade-style solo play vs the AI (artificial intelligence) by downloading this best offline fighting game on your Android.

The touchscreen controls for mobile are quite easy to understand and decent. If you are finding them complicated, you have the option to turn on a dedicated assist button to effortlessly carry out your special moves during gameplay.

This game assures a classic city building gameplay to the players where they have to build their unique city, create residential and industrial zones, build parks, and fight disasters and emergencies happening in the city. You have to build everything that a city needs. To score a decent balance and make money, you have to complete quests, unlock new buildings and properties. Play the game and make smart decisions for your city and ensure the satisfaction of your virtual citizens.

This is the best offline game for quiz lovers. This quiz game has more than 7,000 questions across several levels. Players get over a dozen categories, different modes, and in-game hints so that they can guess the right answer. This is the best quiz game that you can play in offline mode. In case you decide to take up the pro version of this quiz game, you will get additional 3000 questions along with some perks.

This offline game also offers you an unforgettable open-world experience. It features a vast open-world where you have to fight with difficulties, use resources to build shelters, and survive. In this game, a player finds himself on a deserted island with nothing to survive, not even clothes.

A player is required to explore the islands, consisting of several biomes, craft weapons, and collect items for your survival. But, wait! You have to be wary of the dinosaurs roaming around you. You will find different species of dinosaurs, making your single-player offline mode more interesting.

Ravensword is a part of a hit RPG game franchise that was created for the Android platform. This game takes you to the kingdom of Tyreas. You will find multiple maps where you can roam around and enjoy the open-world experience. Comprising some cool RPG elements, the game features a tight-knit storyline to keep players hooked to the game.

The gameplay is based on reflex and precision-based combat where players have to devise dodging and blocking strategies to win the game.

Stardew Valley is one of the truly excellent games that you can play offline. The best part about the game is that it features both offline support as well as controller support. It also features the usual RPG elements. It is a relaxing farm simulation game where a player has to do farming, fishing, mining, fighting, and foraging to restore the farm.

The single-player game mode requires no internet connection, only needed for downloading the game. If you want to play multiplayer mode, then you will need an internet connection. The game provides you more inmate experience than any other game in this category.

We have covered all the top and most-played offline games that you can play on your Android and have the best time! Have fun without depending on the internet connection.

Let us know which game you liked the most.