7 Trends That Has Reshaped The Online Gaming Industry 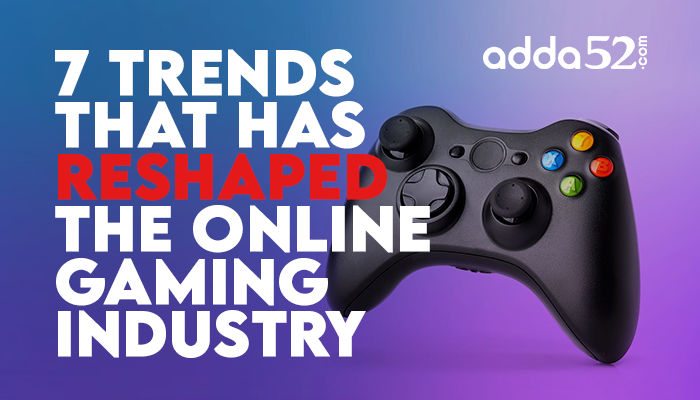 The growth of the online gaming industry has been incredible over the past few years. The growing requirements of the modern generation, shifts in our habits, commingled with the technological breakthroughs is the prime reason that the gaming industry is skyrocketing like never before. The key technological breakthroughs such as advanced gaming consoles with incremental updates, dedicated PCs and laptops for gaming, mobile-driven gaming, augmented reality, and many more have played a vital role in changing the face of the industry and unlocking gateways for the coming generation of gamers.

The rising demand of the gaming industry has enabled everyone (from game developers to marketers) to collaborate and design a gaming ecosystem that is an exciting and out-of-the-box gaming experience to the gamers. Whether it’s about introducing the popular traditional card games like poker to the digital platform or designing the larger-than-life game characters, game designers are doing their level best to match up with the pace of rising gamers and keep them hooked to the games.

Without any delay, let’s discuss some of the top trends that have disrupted the gaming lexicon and accelerated its growth over the past few years:

Online gaming has completely modified the existing definition of gaming. There were times when gaming was once associated with hefty-game set-ups, high graphic cards, and expensive consoles. But with the advent of mobile gaming, the definition has completely changed. Mobile gaming unlocked a lot of opportunities for players who want to establish themselves as professional gamers. As per reports, the mobile gaming industry has an estimated value of $60 billion.

With the rapid increase of smartphones and affordable data plans, players are not enjoying flexibility in playing but also exploring their careers in gaming. The benefit of playing ‘anywhere anytime’ is the prime reason that has flourished the mobile gaming space. The current trend is the development of mobile-friendly gaming apps and grabbing the eyeballs of the customers with instant sign-up bonus offers, referral amounts, cashback, and rewards.

Players are abandoning the ‘offline style’ of playing the traditional games and moving to online platforms. From cash games online to fantasy sports, people are playing on the go and leveraging the digital platforms to earn extra bucks.

With the option of ‘Live streaming’, you have the opportunity to showcase your skills to the world, without stepping out of your home and building your name as a ‘gamer’. You can say that it has opened new avenues for players. Players are leveraging the option of LIVE streaming to build their fan base and engage with them in real-time.

Even working professionals and businessmen have been streaming professionally and securing a secondary career path for themselves. Going by the ‘Video Streaming Market – Global Forecast to 2021 report by Research and Markets, the video streaming market is estimated to reach USD 70.05 billion by 2021. Not only for the players, but it is also going to be profitable for advertising and marketing agencies.

The rise of online real money games such as online rummy games or poker games has enabled players to win massive cash prizes and rewards in the comfort of their homes. We would say that the real-money gaming segment is still at a burgeoning stage, and gaining a strong momentum every passing day.

The inception of online skill-based games such as poker and rummy brought the first wave of real money games in India. Players are trying their hands at cards and looking for the best poker app on android to explore their potential. Various other trending game genres are fantasy sports and quiz games which are enhancing the real-money gaming market.

There are no two ways that there is some serious cross-pollination between gamers and YouTubers these days. Yes, it is a fact that various people have made their name on Youtube by creating valuable, informative, entertaining, and interesting content on YouTube.

If you search the top most subscribed and watched channels on youtube, you will find that gaming channels are taking the lion’s share of the pie. People are not only doing LIVE streaming but also editing their gaming videos to make them more interesting and humorous.

Incredibly, gaming channels are ranking so high and attracting more and more gamers. Even people with average gaming skills are using their communication and humor to make their gaming videos interesting and attracting the attention of the audience. The more watch time you have, the more Youtube would promote your channel. From doing a quick poker game download to teach poker tips and tricks to the people or playing fun games to provide a laughter blast to the viewers, players are exploring different online games.

Augmented reality is a technology that innovatively combines the real world with the virtual world and creates a dreamlike mid-path for the players. The opportunity of adding digital information in real-time is emerging out as the game-changer for gaming companies. AR technology has enhanced the perception of modern gamers across the globe and also accelerated engagement levels.

The game ‘Pokemon Go’ is one of the biggest examples of augmented reality that gained a lot of accolades from every category of gamer. Everyone knows that the game was a mega-hit as it grabbed the attention of people by injecting virtual characters into the real world. The immersion of digital characters in the real world makes players feel like they are having a real-time interaction with the characters.

Virtual reality has also thrilled modern gamers by providing an unbeatable gaming experience. By imparting an immersive simulation of a 3-D environment, VR games have become a major hit among millennials. This technology has been used by the companies to create a realistic image along with appealing sound sensations so that players can imagine their physical presence in the environment. They can discover a thrilling virtual world which they can control by their body movement.

With more and more players looking for a captivating gaming experience, game development companies are infusing this technology to offer an unbeatable combo of real and virtual environments.

There were times there were no significant console upgrades. Nowadays, to constantly upgrade the existing systems, companies tend to announce and release incremental console upgrades every 6 months or in a year. To serve players with the best and survive in the cutting-edge scenario, software and hardware companies come up with incremental updates. Various leading hardware manufacturers in the marketplace like Microsoft, Sony, and Nintendo keep coming up with incremental console upgrades for their line of products. A new version of the current game system is released with brand new and/or upgraded features so that players can also upgrade their gaming experience with time.

The latest example is that both Sony and Xboxhave come up with their iterations of PS4 and Xbox.

These are some latest trends that are responsible for glamorizing the gaming industry and providing prosperous opportunities to gamers. The rising demand for experiencing out of the box, the arrival of new trends, and constant upgrades in the software are altogether providing a strong foothold to the Indian gaming industry.