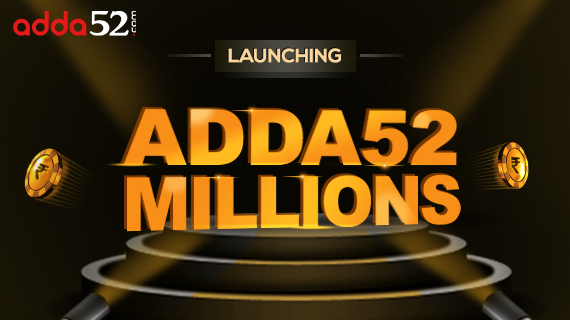 Online MTT grinders of the country are already taking a shot at this biggest ever online poker tournament. The daily satellite event with buy in of Rs. 200 started on September 2 is attracting large number of poker players. Though the first day of satellite only saw 12 participants, but this number has drastically increased in following days with 69 entries on September 7.

These daily satellites will run till September 25, and anybody who does not get entry to the finale through these daily satellites has an option to play the Deadline Satellite on 26th and 27th September with a buy-in of Rs. 1,000. Furthermore, players can also directly buy-in the INR 10K ticket to the Finale Event on Sept 27.

Adda52.com has been known for running several big guarantee tournaments like Poker Millionaire Tour and Indian Online Poker Tour. This is the first time that the site has raised an ante announcing Rs. 10 lacs guaranteed prize money in a single tournament. Thus, holding on its promise of giving away the biggest guarantees and attracting the best player pool, Adda52.com has once again raised the bar high in the online poker fraternity.

If you want to fulfill your poker dreams, then Adda52.com has exactly what you’re looking for. Don’t wait too long. Go Play and grab your chance to win the inaugural edition of Adda52 Millions.

Here is the brief structure of the tournament: