They say the quality of seed decides how mighty the tree would be. This was aptly characterized when Mr. Anuj Gupta, Founder CEO of Adda52.com visited Macau recently. Anuj was in Macau from March 17-19 to attend the iGaming Asia Congress where hundreds of internet gaming operators assembled to discuss the prospects of this industry in Asia. 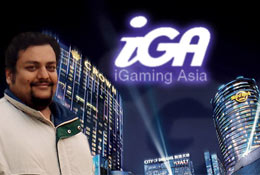 Anuj addressed the seminar speaking about the current scenario of internet gaming in India and how Adda52.com has contributed to this industry. He emphasized the extensive use of Data Insight and Business Intelligence to enhance the customized user experience which will drive the market in coming days. Speaking about the mobile gaming Anuj said, “Increasing number of mobile users and connected devices has created a new segment of users in this market which needs to be addressed very soon. We at Adda52 ensure that all our gaming platforms are compatible to all standard devices so that players be connected at any time of the day irrespective of where he is.”

A special invite-only poker tournament was organized at PokerStars LIVE poker room on 18th March. Giving Anuj company at the poker table was Mr. Prateek Lohia, Sr. Manager – Strategic Marketing Adda52. PokerStars Pro Celina Lin was the guest player in this tournament. After battling it out in several levels of play, the field of 40 runners was slashed down to the final table. Prateek’s good run on the table came to an end in the 9th place.

Prateek kept railing Anuj on the final table to keep him going and win the tournament. After a few eliminations, Celina found herself up against Anuj in a hand. To her surprise, Anuj outplayed and busted her out in the 4th place pocketing $100. Winning this pot rocketed Anuj’s stacks following which he aimed for the top spot. Kenny Sut of Indonesia was the next to get eliminated. He was rewarded with $100 worth of bitcoins for his 3rd place finish. It was the time for Anuj to ship it in the heads-up but he fell short and finished as the runner-up. He was rewarded with $300 worth of bitcoins and some goodies.

Adda52, India’s largest poker site has always worked with a vision to promote this game of skill among the blooming talented youths of the country. The organization which is headed by such experienced personalities like Mr. Anuj Gupta who is also passionate for this game can only promote it the best way. With so much of skill and ardent people on-board, Adda52 has emerged to be the sole leader of the Indian poker industry.