Meet Mr. Rajagopalan who has emerged as the winner in Adda52’s Fly to Vegas promotion. he will be accompanying Sumit Sehgal for Vegas. With this awesome victory in hand, Adda52 had a conversation with him. 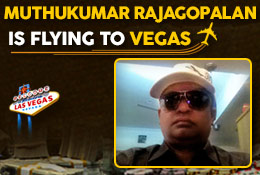 1. Hello Mr. Rajagopalan (hero1965), thanks for your conversation with Adda52. Firstly congratulations on winning the ‘Vegas Leader-board Series’ Tournament. For our readers who don’t know much about you, please tell us how you got into playing poker?

I started playing poker 2 years ago. At that time, I was into stock market trading and used to get some free time to play online poker. Then, I also used to play poker live at casinos in Bangalore, Dubai and Macau, though I lost more and won less. Now, I am a business entrepreneur running a fashion house. So, due to time constraints I have restricted myself to online poker.

2. How does it feel after winning the second edition of adda52.com ‘Fly to Vegas’ tournament?

I am really excited as I do not consider myself a poker pro rather I am still an amateur player. Furthermore, I usually play more real cash games in comparison to tourneys as lot of patience are required in tourneys. I started playing tourneys 2 months back when first series of Fly to Vegas took place. In first edition, I reached the finale and busted after 15-20 minutes, but still finished at 17th place. Prior to winning Vegas Leader-board series, I have also won an IOPT tourney.

3. How did you qualify to the finale of the ‘Fly to Vegas’ tournament?

I qualified to the finale event through Leader-board. I was a consistent performer in the weekly leader-board.

Being a cash game player, I was not at all very serious about this tourney, and in the first week I was ranked at 9th position. But when I won IOPT, I played the tourney earnestly. In the second week, I was ranked at 3rd place and reached 1st position in the third week. In the fourth week, I was shortlisted for the finale event. In the finale, I got to play against pros like Tushar Makhija ‘tushmakster’. Though I am not much experienced like him, still I stayed the course and played fairly to reach at the top. Though it was an experiment to try but my hard-work paid off. While playing for this tourney, I use to read poker tutorials and watch videos of poker professionals.

5. In ‘Fly to Vegas’ Tournament, you have been a leading performer. Which hand was your turning point in this tournament?

In the finale, the turning point was when ‘tushmakster’ was eliminated as he was the strongest player on my table. In one of the games, we were in head-ups match. I held A-Q suited and he had Pocket Queens. In this game, he frequently raised me, and I also re-raised him. However, I had hit an Ace on the flop itself which helped me to win that game.

6. Could you share the final hand which won you this tournament?

When the finale event started, I lost 200 chips in the first 10 minutes because of bad internet connection. I was really upset as in the beginning itself I was not in a good position. However, after 1 minutes, my internet connection was working fine and then I started playing seriously. At that point of time, I was targeting ‘tushmakster’, and soon became the chip-leader thereby leaving no space for others. In the heads-up match with Gaurav Chauhan ‘gc909’, I was already in the lead with 45,000 chips. I was dealt A-3 unsuited and he held 9-6 suited. I was ofcourse a chip leader with 52,000 chips and my opponent had a stack of 7900 chips. He went ‘All-in’ during pre-flop and I called him. Afterwards,  we both hit a pair on the flop when the board ran 6-A-J. Later, the turn card 4 and river card 5 were in my favor.

7. Have you ever played at international level tournaments like APT, EPT, etc.?

As I have just started playing tournaments, I have not played any tournaments at international events like APT or EPT. Even in Bangalore and Macau, I have played cash games only.

8. Have you prepared your Vegas wishlist so far?

I have no wishlist for Vegas. Presently, I am concentrating, and looking forward to $ 10,000 Main Event of world’s largest poker tournament. I have already started training myself on various aspects of poker like patience, reading abilities, psychological study and body movements.

9. If you weren’t a poker player, what would you be doing?

I am basically a recreational player, and poker is my latest passion. Already 49-year old, I have achieved almost everything in life. It goes other way round in poker, that is, I have lost more in poker.

10. Do you have any suggestions for Adda52 to improve game playing experience for poker players or online game lobby?