Sumit Sehgal scooped this chance to participate in the Main Event of World’s biggest Poker event at Las Vegas by defeating the other 24 runners. The prize package that Sehgal has won includes ticket, accommodation, and participation in $10,000 Main event at the Mecca of Poker, i.e. Vegas. That means the total prize is more than Rs.8 Lakh plus a life time opportunity to meet and play with international poker champions. 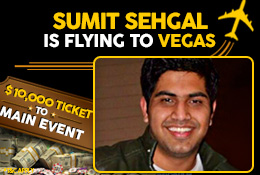 Adda52.com, India’s largest poker site, organized a one of its kind loyalty based online poker tournament wherein only 25 players could qualify for the finale. In the final the players were supposed to play off against each other and the winner would be sent to Vegas to participate in the world’s richest Poker tournament. Sumit won this finale by defeating Ishwar Sundaram in the heads up match which saw both players exchange chips for an hour. This now means that Sumit will be going to Las Vegas to participate in the biggest Poker tournament having prize pool of over Rs.590 crores.

Sumit started the heads up duel with 167,438 chips in comparison to Ishwar’s 72,562. The battle had all the makings of any Bollywood movie with drama coming in when Ishwar got disconnected for some time. Sumit managed to chip up during this duration cashing in on the blinds. But Ishwar bounced back and kept chipping up to deplete Sumit to 40,000 chips. The turning point for him came when his sA d10 defeated Ishwar’s Pocket 8’s when the board paired up hK d5 dK dQ sQ. After this breather, Sumit didn’t look back and also managed another double up when his sK cK stood ground against Ishwar’s cA d9 when the community ran d5 c9 s3 s4 d3.

The final hand saw Ishwar going all-in with his small stack of 20,572 chips with dA h9 where Sumit’s c5 h5 flopped a set s5 d7 s4. The turn s7 and river h4 were a brick for Ishwar thus sealing the fate for the Fly to Vegas Champion Sumit Sehgal.

This endeavor of adda52.com is intended to promote Poker in India so that more and more Indian Poker players can participate in international Poker tournaments. The intention of adda52.com is to form a complete team of Poker players who can be the part of Main Event at Las Vegas and hence the first player of this ‘Team Poker India’ is decided through this tourney. However, it is still not decided that who else will accompany Sumit but he should start perfecting his Poker skills so that he can give his best moves there.

In order to present the best of his skills at World’s largest Poker event, Sumit has already started practicing as he says that he has started sharpening his Poker skills as soon as he read about this promotion at adda52.com. He has been participating in various poker tournaments at adda52.com for past few months and practicing Poker skills with his whole concentration for past one month. Sumit was elated after this win and said, “I had never even dreamt that I would get a chance to play in Las Vegas. Even after winning this tournament, I am still finding it unbelievable that soon I will be playing poker with the best players of the world. And I am not going to take it sitting down. I am already preparing for it and watching poker videos to prepare myself properly for this big challenge. “

We congratulate him and hope he will show his best moves at Las Vegas.”