A Squad of Adda52’s Players Flying to Vegas 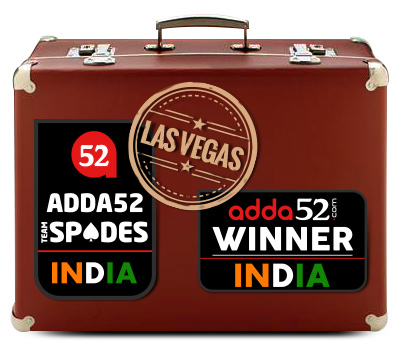 With 2015 World Series of Poker just down the road, here is an Exclusive News coming straight from Adda52.com. Though you must have already marked your calendars with the names of tournaments that you will play during the long summer in Las Vegas, but of them the most awe-inspiring is the WSOP Main Event which is set to kick off on July 5.

In this most hyped poker season, Adda52.com is sending a team of 10 poker players from India to Vegas. And, do you know it would be the biggest team from Asia-Pacific circuit to take part in WSOP? Yes; it’s true!

Every poker player around the world aspires to participate in the world’s biggest poker stage surrounded by the dazzling glitzy lights of Las Vegas to become World’s best poker player. To make this very dream true for Indian poker players, Adda52.com made a firm effort to transcend the national boundaries, specially the social, cultural and legal barriers related to poker in India.

At the beginning of 2015, Adda52 ran “Fly to Vegas” tourney providing an opportunity to online poker players from India to experience the most hyped poker carnival in Vegas. This exclusive promotion was spread over 4 months, of which 4 players turned out to be ‘hit it big’ winners namely, Sumit Sehgal, Abhineet Jain, Muthukumar Rajagopalan and Pranav A.

Accompanying them will be the four members of Adda52 Team Spades – Aditya Sushant, Amit Jain, Kunal Patni and Muskan Sethi, who will be playing the biggest side events throughout the tournament and the $10,000 Main Event. They are among the top poker pros of the country, and of them, Aditya Sushant and Muskan Sethi have played and finished in the money in WSOP 2014. Furthermore, Adda52.com’s Founder Anuj Gupta and India’s prominent player Pranav Bagai will also be a part of this journey to the world’s prestigious poker tournament.

With this exclusive poker tour, Adda52.com aims to promote the best of Indian Poker Circuit in the international arena. Hope they bulldoze their way past the competition and claim the spoils of victory bringing the big game home as winning that $10 million prize money and the diamond-encrusted gold bracelet is no different. Good Luck to All!