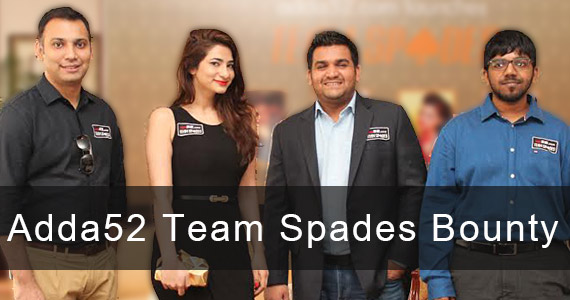 This Dussehra, it is going to be exciting at Adda52.com, with a new and cracking promotion for all Indian poker players. The poker site is known to run lucrative poker tournaments for its huge player base. Bringing back the pros on the site, Adda52 has launched a special event in the ‘Dussehra Special’ week. Adda52 Team Spades is all set to battle it out with poker players from all walks of life on the 22nd Oct, the auspicious day of Vijayadashami.

The members of ‘Adda52 Team Spades’ includes players with long and illustrious poker resume who have shown consistence performance in both live and online poker tournaments namely Aditya Sushant, Amit Jain, Kunal Patni and Muskaan Sethi. A bounty tournament is scheduled on 22nd Oct with these pros. A bounty tournament is the one in which a poker player is given a cash prize for eliminating his opponents. In this case, anyone who busts any of the Adda52 Team Spade pros will take away Rs. 25,000 in cash prize. So, register in the tournament and get ready to experience the poker thrill as this bounty element is set to add a touch of fun and it will also increase player’s chance of walking away with something to show for their money.

That’s not all. The festivities continue throughout the week from October 19 to October 25. The ‘Dusshera Special’ promotion includes a number of big prize tourneys and luxury goodies up for grabs for players. This month the poker portal is offering 60 Lacs as prize money in tournaments of which approx. 26 Lacs has already been given away in the big tournaments like Poker Millionaire Tour, India Online Poker Tour, etc. Some players who have already made it B-I-G this season are ‘gudmorning’, ‘Jeetu07079’, ‘pokeherdoc’, ‘kartik1706’ and ‘Peacelover’. There are still many opportunities available for poker players to earn bundles of money by participating in this special poker fest.

Further, Mega 10 Prime Tournament will offer the poker players to multiply their money two-fold as prize pools has been doubled in 3 different events namely Wed 50k 10 Prime, Friday 10 Prime and Sunday 10 Prime. There is something for PLO lovers too. That’s not enough for excitement, players also will get to vie with the Sunday PLO Rush event of Mid-Day Dual Series that will take place on October 24. Additionally, players can either play satellites to Apple Watch Tournament running throughout across the month or can directly participate in the Finale event of Apple Watch tournament on October 24.

Following is the schedule of key tournaments for the Dussehra week:-

The festival that marks the victory of good over evil basically records the start of the new poker season with run down of events until the festival of colours. This first ever weekly poker fest is really B-I-G, and Adda52.com is the first Indian poker site to do so. The countdown has already begun and you too can take your share from the prize pool, just log on to Adda52.com and join the fun!