Big news for Indian poker Industry! The poker pioneer of India, Adda52, has announced its poker pro Team Spades. The largest poker company, has officially unveiled its well-founded and well-thought of ‘Team Spades’ that will represent India at several prestigious poker tournaments of the world. 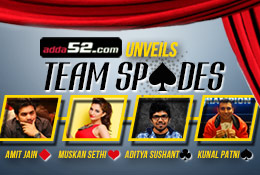 For adda52.com, it is like a historic moment that the company has achieved through its hard work & dedication. Founded in 2011, Adda52 has emerged as the largest poker site in the past 4 years, giving a tough fight to its competitors. Recognition of ‘Team Spades’ is an unbeatable milestone for it.

Though the team has already made a breakthrough with an Exhibition SnG (SitnGo) Match that was hosted by adda52 on 15th Feb, 2015 wherein Team spade joined the table with International Pro Jonathan Little and winner of Fly to Vegas Tourney – Sumit Sehgal. After 2 hours of play, Aditya Sushant won this inaugural exhibition match after defeating Kunal Patni in the heads-up. The official launch of Adda52’s sponsored ‘Team Spades’ will take place on 24th Feb 2015, at a Five Star Hotel in NCR.

Undoubtedly, Adda52.com will host more such tournaments in which members of Team Spades will play against several WSOP bracelet winners and top pros of international poker circuit. Team Spades is a perfect blend of experienced players & represent young talents of India.  Here are the fabulous fours of Team Spades –

Adda52.com has always made efforts to surpass the social, cultural and legal barriers related to poker in India. With the launch of Team Spades, Adda52.com has given a new horizon to Indian poker Scenario.