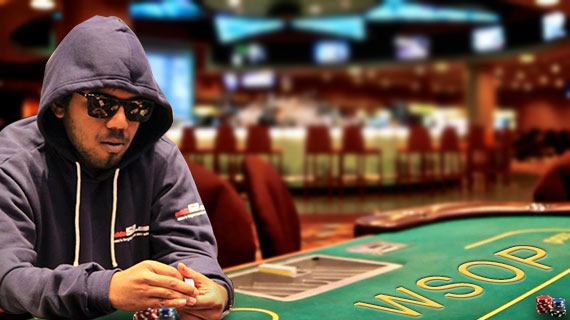 WSOP…these 4 letters alone are enough to give hope to thousands of people from across the globe. Once a year, every year, all these people go to the land of the promised, where dreams are made and shattered on the turn of a card sometimes. This year, I was one of those hopefuls trying my luck and tried was I relentlessly.

Every day was rinse and repeat for most of my trip. Wake, play, lose seemed to be my mantra. I didn’t let it affect me too much, though. I kept at it hoping things would turn around eventually. Cash, mtts, sngs, satties…it was all a blur. “Vegas and the fucking Mirage” as Worm aptly put it. Thankfully, there were lots of us and having someone to share the brutality with lessened the pain.

All misery aside, there were quite a few highlights this time. Adi had 2 deep runs 64th in the Monster Stack and an agonisingly close 71st in the Main. I’m sure everybody was rooting hard for Adi to pull through before they pinned their hopes on Negreanu and we all know how that one ended. Shanky final tabled a Venetian 1k and finished 6th besides finishing 13th in the Wynn Main. Raghav Bansal who set LV on fire had deep runs in almost every event and became the 1st one to final table a WSOP event. He gave us all a huge sweat. Unfortunately, things didn’t work out on the final table but hats off to him for his achievement.

The main event for me was a big disappointment. I struggled for most of the day and finally when I started to pick up some momentum towards the end of the day, I lost a huge flip and then lost 77&lt;KK to bust in the last level of Day 1. However, just when I thought my trip was done, I pulled a Hail Mary and managed to run deep in the Venetian Main where I finished 12th. It ended up being my trip saver and I didn’t have to return depressed on the flight back.

I look forward to going there again next year. However, I most definitely won’t be playing as many events and will probably only do a short stint. Until it’s WSOP time again, I’m going to try and stay focused, work on some of my life goals and hopefully be in a much better position than I am right now.

Previous articleHeads Up Poker Game : Men Vs Women
Next articleWhy PMT is the Biggest Online Poker Tournament Property in India?