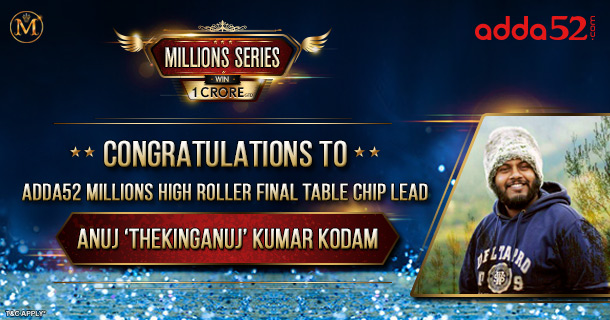 Last Friday in Adda52 Millions Series saw the turn of Millions High Roller -6 Max, an INR 22K buy-in event with INR 20 Lacs in the guaranteed prizepool which took place at 9:30PM and attracted a total of 77 entries. After several hours of fierce battles, the final table for the High Roller was reached with final 6 players who will be returning to Deltin Royale Goa to play the final table.

Leading the final table is Anuj ‘thekinganuj’ Kumar Kodam with 934,432 in chips. He is followed by Ankush ‘ invincible29’ Prasad on 2nd place with 401,007 chips. Sitting on 3rd place is the well-known Pulkit ‘championplayer’ Goyal. The 6 finalists in Millions High Roller final table are guaranteed hefty prize money. The eventual winner gets more than INR 6 lakhs, while the runner-up will walk away more than INR 3 lakhs in the prize money.

The official schedule for the final table of Add52 Millions High Roller to be played in Goa among 6 final players will be announced very soon. Watch out for our update on the upcoming High Roller final table schedule right here!