Hi guys just got back from IPC at Goa and chilling now before heading for a family holiday on the 9th then manila for apt on the 13th and then mostly Bangalore around 30th April for another poker series. As u can see its a super hectic month coming up and hopefully a really profitable one. 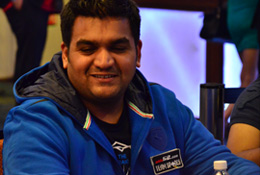 Goa was a lot of fun meeting up with all old friends and playing record numbers for India and was a very well organised series. I bricked ipc and only cash i got was 25k for the 5 bounties i got in the  last SKO event but yeah last 3-4 poker trips have been pretty dry for me with just 1 decent score where i got 3rd in tilt main event.

I did make a few mistakes during ipc which could be stated as standard tbh ( like aq<ak or aqs<qq and some other small pots which went post flop) but i know i could have done something different if i thought better, harder and if i was a little more solid but yeah good thing is i am writing all of my little mistakes down and ill hopefully not repeat any of it in manila or future events.

During IPC 4-5 players asked me for advice as to how to tackle these huge fields so i thought it would be a good thing to blog about because i feel numbers are gonna go up substantially and i foresee a 500 player live tourney in 2016 but for that organizers might have to give two starting flights.

There are some small adjustments one should make to profitably beat these events which have big numbers.

( all the above points are good to practice in smaller turnouts as well but in larger turnouts they are almost a must)yeah i guess that pretty much is it coz everything else , like sleeping well not drinking lot of redbull/coffee and other stuff, has been previously mentioned a lot of times.

Previous articleAdda52 Journey
Next articleFly to Vegas Winner Abhineet Jain: My goal is to be Adda52 Team Online