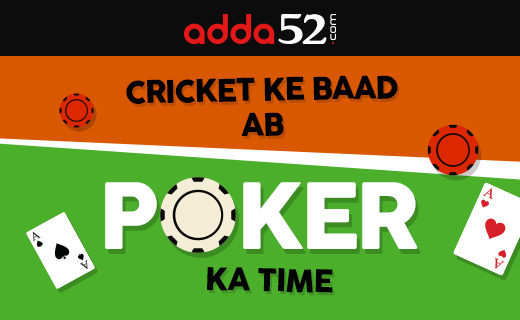 India and Cricket are almost always said in the same breathe, and the credit goes to many years of dominance of the Indian cricket team in the international arena. Moreover, the love of Indian people for cricket contributes a lot to the annual revenue of sports industry. Thanks to the fact that Indian Cricketbrings communities together, it has encouraged the growth of other sports within the country.

Unquestionably, India is now coming to the fore and expanding its sporting horizons. After cricket, the next flourishing outdoor sport that is making its mark in India is football with the launch of Indian Super League that has brought widespread recognition to the sport. Following this chain is an indoor sports game called poker. Some may be surprised to know about poker but it is categorized as a skill game because it requires expertise equivalent to chess.

With growing popularity of poker or Texas Hold’em poker as it is commonly known as, you can find many online poker sites (eg. Adda52.com) popping up and live poker tournaments (India Poker Championship IPC) taking place in India. Moreover, many of the poker professionals from India have gained international recognition, and of these Kunal Patni, Amit Jain, etc. are some of the most recognizable players. Apart from being a lucrative indoor sport, poker has attained the international viewing spectacle. The world’s largest poker tournament “World Series of Poker (WSOP)” is now streamed on ESPN – one of the biggest sporting stations in the world. Likewise, other poker events like World Poker Tour and European Poker Tour, are shown on some of the biggest TV networks in US and Europe.

But will poker achieve the fame that cricket holds in India? This skill-based game is already preferred by the youth and is set to become popular among the masses in coming years. Though it may not catch up with cricket but can easily out rival games like football and chess. Cricket will always remain India’s game.

With the rising demand for lesser preferred games, people of India can now get to see innovations and transformations taking place in the sports sector in India. The great initiatives such as Indian Super League, India Poker Championship, Hockey India League, etc. are changing the old face of Indian sports, and the industry is evolving to overtake IT and related industries in next 5 years. Thus, now the sports-friendly audience and novice sports players have the privilege to watch and participate in something other than cricket.

And, of all the emerging sports, playing online poker is the most profitable sport and the best part about this game is that anybody can be a poker champion because of its open door policy. Unlike cricket, poker doesn’t have any barriers to entry, the only condition is that the player is above 18 years of age. Additionally, cricket requires physical skill set like accurate vision, keen reflexes, etc to be a pro player while poker players need more mental abilities than physical abilities to be a winning player. Cricket is undeniably the king of sports in India but it provides very few opportunities to players to play at the highest level. However, poker is open to all at both national or international level.

Therefore, in the next few years, the upsurge for poker will definitely tempt the interest of young Indians.

Previous articleQuestions to Ask Yourself While Playing Poker
Next articleIndian Poker League is Here!