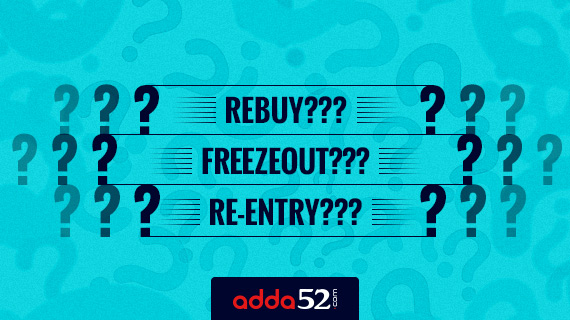 Poker tournaments are a series of tourneys or events which take place over a day or several consecutive days. Poker tournaments are events where poker players compete to win every poker chip in the game. To enter a tournament, players generally need to buy an entry ticket, paying a fixed buy-in and in return receives a pre-defined specific quantity of poker chips to play in the tournament. You not only find poker tournaments running in casinos or poker rooms but also on online poker sites. The variety of poker games appeal to the dynamic needs of the players and you can find a format fitting to your playing style.

Re-Buy Tournaments have made their spot in the poker world. These tournaments usually have a specified time period at the start of the tournament in which poker players can re-buy the chips if they are out of chips in order to continue playing in the tournament. The re-buy amount is the same as the buy-in amount. Once the player opts to re-buy, he gets another set of starting chips. However, if the time period for re-buy ends, players cannot opt for it and the tournament continues in freeze-out format after that. Thanks to its essence of re-buy that these tournaments rack up a higher prize pool than freeze-out tournaments. There are two sub-types of re-buy tournaments: Limited Re-Buy (when each player can re-buy only certain number of times) and Unlimited Re-Buy (when players can re-buy as many times as they want, until the re-buy period is over).