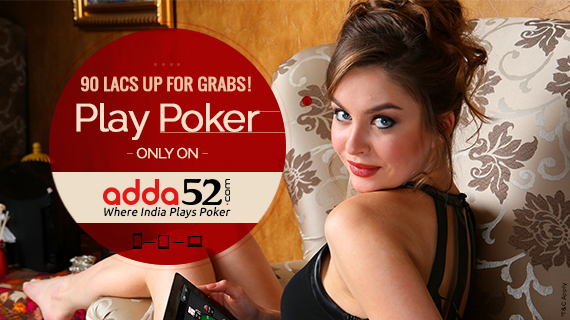 Diwali is just around the corner. And it is time to head to Adda52 and make the most of the exclusive ‘Festival of Light’ promotions on India’s largest online poker site. Continuing with last month’s excitement, Adda52.com is back again with a plethora of poker promotions for online poker enthusiasts. Diwali with good luck and wealth comes but once a year, and not until you play on Adda52.com. Because, in the month of November Goddess Laxmi will be coming to shower lacs of rupees in prizes, with a bit of added Diwali blessing. So, November is surely going to be a Millionaire Month at Adda52.com as the poker site is offering its players a total prize money payout of Rs. 90 Lacs.

The month will start with a novel tourney namely “Best Hand of the Day” that will feature from November 1 till the Diwali Day, i.e, November 11. In this new promotion, the highest hand of the day will be rewarded with prizes such as iPhone 6 S, Gift Cards etc as per their loyalty level. Along with this promotion, a new tournament is introduced for the night owls – “After Party” at 2 AM. So, whenever your Night Card Party or Diwali Party gets over, just make way to Adda52.com to play this unique promotion from November 1 to November 15.

Adda52.com will also be hosting series of events in the Diwali Special Week from November 9 to November 15. To start with, there will be a special hand-picked promotion namely “Money Multiplier” specially on Monday, November 9. On this day, Diwali players will get a chance to play Mega 10 Prime Event two times, i.e, players can play Wednesday 50 K Prime Event at 10 PM and 11 PM. So what if you have been battled out of the tournament that started at 10 PM, you can play the tournament again at 11 PM.

Coming up next is the Diwali After-Math promotion in which highlighting the main-stream action is the Adda52 Team Spades Bounty event that is scheduled to take place on the auspicious day of Govardhan Puja. In this event, any player who registers for the tournament can claim his bounty only if he/she eliminates any of the Adda52 Team Spades Pros.

If that’s not enough of the poker action, poker players can also multiply their Diwali earnings by participating in Indian Online Poker Tour (IOPT) – IOPT 1.5 Lac and IOPT 3 Lac on November 13 and 14. Week doesn’t end here; the top-drawer event – Depositors Freeroll Tournament offering Rs. 5 Lacs as prize pool will take place on Sunday. So, all the registered players – new and existing – of Adda52.com need to deposit atleast Rs. 500 to get a ticket for this top-drawer event.

Here is the schedule of Diwali Special Promotions:

The ultimate prize pool is still left. Be prepared for unlimited poker action on Adda52 Millions. The satellites for this ‘10 Lacs’ prize pool event will start on November 2 and accumulate on November 29. Coming up next would be the Poker Millionaire Tour in the first and third week wherein players can win Cash Prizes upto Rs.16 Lacs. This month Loyalty Booster Series will host the events with a Re-Entry option offering players to win upto 2.4 Lacs on November 16 and 17. Further, the events under Mega10 Prime will incorporate Rebuy and Re-Entry Tournaments.

This festive month will mark an exclusive launch of many other new tourneys like Mid-Dual Series will now incorporate Saturday PLO Rush and Mid Day Special. On the flip side there will be a “Wake Up Call” Tournament – an afternoon promotion that will run daily at 1:30 PM.

Diwali 2015 is going to be the most rewarding for Indian poker players. But the magic of online poker is such that the thrill of poker doesn’t end with Diwali, at Adda52.com it is an all-year-long poker party for skilled players. So, what are you waiting for? Win big and play poker with the best in India!

Previous articleTen Commandments of Poker
Next articleIts TIME to Party