Five Card Games Everyone Should Know 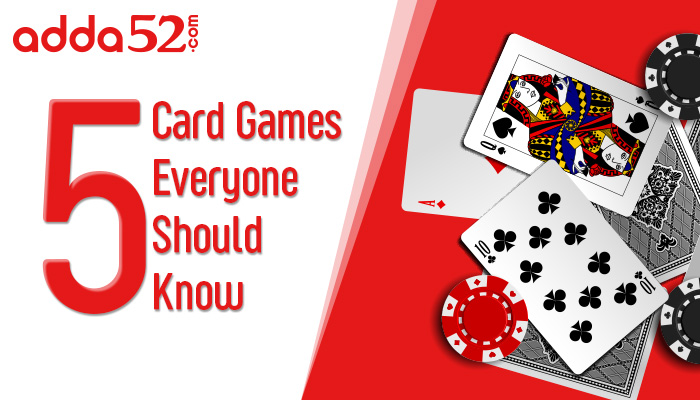 Thanks to the diverse history of card games, one still play these games with your family and friends. In the world of online games, you will rarely find a person who doesn’t play card games online. Following are the popular card games that are worth playing as these games involve skill and have intrinsic value.

Rummy is considered the most popular card game across the globe. It is a ‘draw and discard’ game wherein players have to make sets 3 cards of the same number/rank, or 3 suited cards in sequence. During the gameplay, the players draw a card from the undealt card pile and discard the unwanted card. Once all the players have set their cards in hand, they need to show their cards and earn points based on game rules. The player who earns the maximum points is the winner. Rummy is believed to originate from the Chinese tile game mah-jong in 1700s. Gin rummy was the first variation of rummy that was created in 1909 by teacher Elwood Baker and his son, Charles Baker. As it is easier to learn rummy, the game is still played by families to as past time activity at home.

Poker stands high with the tag of ‘most played’ card game in the world and the credit goes to the skill attached to the game. An American card game has constructive gameplay and a unique betting structure which sets it apart from other games. The game was first played in New Orleans in 1820 on Mississippi River gambling boats. It was then the only way to socialize and a source of entertainment for the men. Texas Hold’em is the dominant and most played variant of poker. The poker has gained the status of skill game in many countries of the world, thanks to ESPN for televising the World Series of Poker in 2000. Today, one can also play online poker in real money on top game sites like Pokerstars, Adda52, etc or download the app to play it on the go.

If you love to play tricks, then this is the game for you. Hearts game is a ‘trick-taking’ card game wherein players have to avoid taking tricks with penalty cards in hearts suit and queen of spades, depending on the cards in the pile. In this card game, the player who gets highest points (100) is the losing player, and the player with lowest points is the winner. The game came into limelight in late 1800s but originated in 1600s in France and was called “reversis. The modern version of the game was launched in 1990 when Microsoft pre-installed this game in its Windows operating systems. Since then, it has been popular among teenagers and college students.

Solitaire – a game that can also be played by a single player- originated in 1700s. Then, it was played by multiple players who used to take turns by making moves or each player used to play with their own deck and see who makes it first. Later, innumerable versions of solitaire came into existence. Of all – Klondike, FreeCell, and Spider became the most popular as these were stocked on most machines in the 90s. Today, you have thousands of apps to download that offer varied versions of Solitaire.

Blackjack is the oldest and widely played game in casinos. The game is really fast to play and easy to learn. In this card game, a player has to bet against the dealer and he/she does not have to compete with other players. The key focus of the game is to hit 21 or atleast get closest to 21. If you get closer than 21 to the dealer, you win and if the dealer is closer to 21, you lose. Originated in 1500s, the game was then popularly known as ‘Twenty One’.