Five Poker Playing Styles – Which One Is Yours? 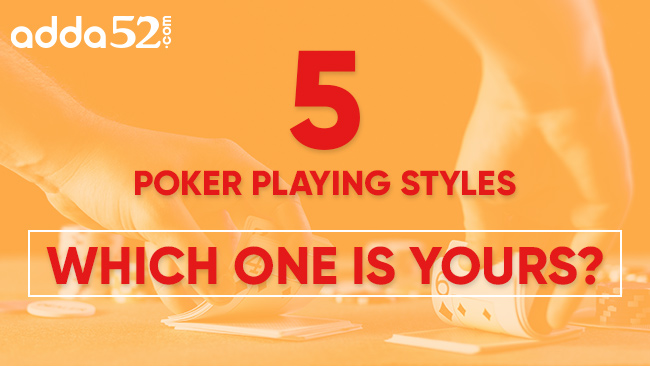 Just like four suits in a deck of  52 cards, there are five playing styles of card games. Poker is not only played with cards, but also with observation and different mindsets. Whether you are playing online games with friends or at a live table, you should always be able to read the opponent’s mind and the decisions they make while playing. This technique can help you to know their emotional and psychological tendencies and determine your game style against them.

Studying your opponent’s proclivities plays a crucial role in your winning intentions. Every action taken by the opponent unfolds something about their style. Now let’s understand 5 common playing styles as described below:

When a person is new to anything, or he is just playing with some 100% bonus offer in poker, he lacks experience and plays casually, such category of players is known as fish players. They are new to the game and don’t know how to play poker. If you want to play poker professionally, this is not the type of poker player, you would want to be recognized. Being new to the game and lack of experience, Fish players have no idea about the strategy and are prone to loose pots. Want to spot a fish on the table? Notice the actions taken by the players on the table as they are mostly Calling, overbetting or under betting, showing off their bluff, or else playing All-in. These players are also known as “Donkey” due to their poor playing habits.

The type of player where you have money to play great but not a strong skill set to make it huge. Whale players generally bet extraordinarily large amounts because of their high bankroll and are less concerned about winning a hand. Their motive for playing is fun and not winning. Whale players are amateur poker players who end up giving huge amounts on the table. It becomes difficult to spot a whale when there are few fish players also available on the table because of their standard practice of going All-in. These players generally do not win money games because of their amateur gameplay.

Loose-Aggressive players believe in playing a lot of hands, which makes them raise the bet before and after the flop. Rather than playing strong hands, they tend to play too many hands without any hand selection. Since they are playing every hand and continually raising the bet pressurizes the opponent to fold their winning hands also. One of the significant issues with this playing style is becoming penniless swiftly.

One of the most successful and robust categories of playing styles of poker is tight-aggressive gameplay. Tight-Aggressive playing style is the most profitable pattern of playing poker, where you know your starting hand strength to play selective hands and making the right move to win. However, this player becomes a bit aggressive when in the pot and will put pressure on the opponents by raising or betting at the right time. This style works well while playing against passive players and also beneficial against loose play. Tight-Aggressive players are well known for turning the odds in their favor with a smart strategy. Such gameplay is very useful in long term gain in poker.

Shark players are well known for their strategy and intelligence on the poker table. A shark is clever, so is the shark player in poker. This player type not only knows the risks and combination ratios but also smart enough to read the opponent’s poker face. It is a dream for every poker player to become a poker shark and make their poker journey rewarding. Top poker players such as “Justin Bonomo” is called a poker shark in the industry.

Therefore, It is not always recommended for you to play in one style. Every playing style has its perks of playing at the right moment, and you should always observe the table before making any move.

Play Poker and decide which poker player you are!