Gin Rummy is one of the most popular variant of the Rummy family.It was conceived in the year 1909 by a New York resident named Elwood T. Bakerand his son. It got the name Gin because its parent was named Rum (both being alcoholic drinks).Gin Rummy is played between two players with a single regular deck of 52 playing cards. No wild cards are involved. Ranking for cards ascends in the order; Ace 2 3 4 5 6 7 8 9 10 Jack Queen King. The face cards (K, Q, and J) have a value of 10 points. Ace (A) has a value of 1 point. Numbered cards have a value equal to their face value. 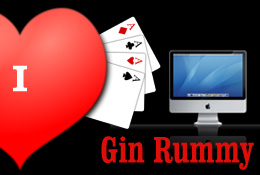 Unlike 13-card Rummy, the objective of Gin Rummy is to score more points than your opponent by melding your hands into sets, reducing deadwood cards (Deadwood cards are cards not involved in any set). Each player is dealt 10 cards. The next card from the undealt pack is placed face up to start the Closed Deck or Stock. Gin Rummy calls for either of the sets, 3 or 4 cards of the same rank or sets of 3 or more cards of the same suit in sequence .