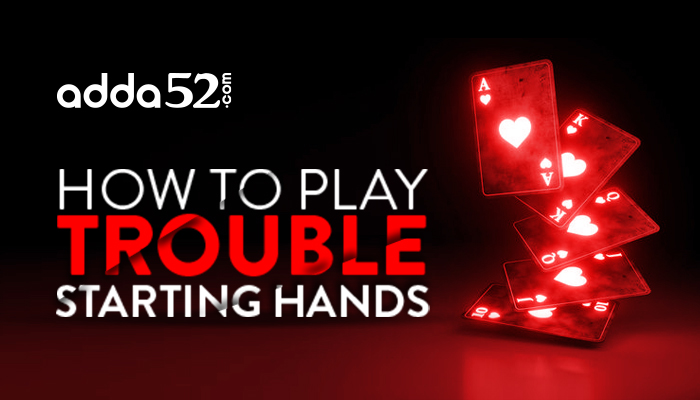 If you are a new player, it is important for you to have a solid understanding of the basics of the game. To see great results on the tables in the long run, you must know which starting hands to play with and which hands to fold. Starting hand selection is one of the most vital skills you need to learn if you want to become a successful player.

Every player, regardless of his level of skills, has experienced playing with trouble starting hands at Texas Hold’em tables. They are different for each player depending on his table position (early middle, cut-off, hijack, or button), table stack, and understanding of the opponent’s skill-set. It is crucial to learn how to play with troubled hands, otherwise, they can make you lose your precious chips.

Ace-Queen is one of the most deceptive hands in Poker. Ace and Queen cards look like a good hand. It prompts you to raise the bet but your opponent’s Ace-King or Ace-Ace can dominate your hand. It is advisable to never play in an early position with Ace and Queen. You should play only if you are in mid or late position and no one has raised the bet before the flop. The other problem with AQ is that it is a tricky and tempting hand which often leads people to overplay. The best way to play with AQ is to raise the bet aggressively before the flop to make others fold. You need to keep in mind that this trick can only work on small stake tables and when your opponent is short of the chip stack. Your decision to play with AQ hand should always be based on the situation, table stack, and opponent’s gameplay.

Pocket jacks are also known as fish hooks. It is called a trouble hand due to the high possibility of your opponents having higher cards such as Ace, King, or Queen. As there are three higher ranks available out there, it becomes risky to go for a big raise at preflop. Playing the position is important as it helps you get the knowledge of the opponent’s possible starting hand. If you are in an early or middle position and received over cards at the flop, raise a little to check the action of other players. If the player after you re-raises, you can assume that he is having a strong hand (Ace-King, Ace-Ace, Ace-Queen, King-King, Queen-Queen). The best option for you in this situation is folding the hand.

AJ is not a great hand and it needs to be carefully played. You need to check if someone raises the bet preflop as he may be holding Ace-King or Ace-Queen. Therefore, you need to be extremely careful if you are playing for big stacks. For example-If, the flop comes as Ace, 5, and 4, and the opponent raises the bet, it indicates he is confident about his hand which can be Ace-Queen, Ace-King, or Ace-Ace. The best way to save your bankroll in this situation is by folding your cards.

King-10 can be a good hand depending on your position and stack. Also called Katie, this hand can trouble you if there is a King on the flop as the opponent may have King-Queen or King-King. If you consider King as the kicker in the situation of 10 as a flop, then there is a possibility that the opponent has a hand like 10-Ace. There, it is recommended not to play at the early or mid position with these cards. You should play with King-10 only in late positions (cutoff, hijack).

King-Jack is a rookie hand which is less risky as compared to King-10. The problem with this hand is it is not as powerful as it looks like. It is difficult to fold due to its face value which sometimes makes you overplay and invest more money in the game. If the opponents are raising and you are in the early position, the best move is to just fold your cards. If you are in the middle or late position and the opponent is not raising frequently, you can raise the bet as the chances of them having King-Ace or King-Queen are less and you have the best hand with a good kicker.

You can find out the trouble cards with the use of probability calculations and mathematics. You have to identify the “sucker hands” which can put you into difficult situations on the table. It is essential for a player to analyze his hole cards and their strength before getting involved in the pot to determine the possibility of winning the game.

Poker is considered one of the best online strategy games worldwide. Remember that winning at the tables completely depends on your style of play and level of skills. What matters the most is reviewing the hands you played after every game session. You need to identify what mistakes you made and discover ways to ensure you don’t repeat them when you face the same situation again in the future. You can play on practice tables to experiment with your strategies and gain an understanding of how to make quick changes in your game plan as per your hand strength and constantly changing situations on the game table.

Playing real cash games is a highly entertaining way to showcase your talent and earn massive cash rewards. You can participate in Ring games, Sit-n-Go, or Multi-table tournaments to compete against other players and win a share of the big guaranteed prize pools.

It is also important to learn about Poker lingo, terminology, nicknames for cards and hands, etc before joining the tables. On Adda52, there are a lot of blogs, articles, and tutorial videos available to help you gain knowledge about all aspects of the game.

So what are you waiting for? Join the online multiplayer games to unleash your inner player and be a part of the biggest communities of players in the country. Create your Poker account NOW!

Previous articleHow to Overcome the Fear of Public Speaking?
Next articleHow To Stay Ahead Of The Competition At The Game Tables

How to Develop Innovative And Creative Ideas?