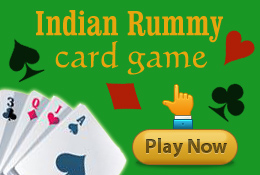 The play continues until a player, after picking up a card, has 13 cards that form valid combinations. In this case the player discards the 14th card and declares ‘Rummy’, placing the 13 cards face up to show that they form the required runs and sets, and winning the game.

No runs or sets are laid out during the play. In Indian Rummy, players keep all their cards hidden from the other players until a player is able to win.

If there are no cards remaining in the stack and no one has declared Rummy by the end of the turn in which the last stock card was taken, the game is void and no one wins.