Indian gaming industry was estimated at around Rs.790 crore in 2009, compared to Rs.650 crore in 2008, implying a net growth of 22 per cent during the period and is expected to grow 32 per cent at Rs.3,100 crore by 2014. Interestingly, Sony PlayStation woke up Indian style games in late 2009 by offering Kabaddi and Gilli Dunda. McDonalds started offering Alooo Tikki burger in India; Coke and Pepsi offer Nimbu Paani flavoured soft drinks etc., the trend is clear; Indians can be impressed only when localized content is created. Zynga, makers of Farmville, were able to popularize farming based game in India (as India is an agricultural nation & 70% of Indians do that). However, many other games like Mafia Wars, City Ville, Fish Ville etc., didn’t become very popular in India. Fantasy Cricket games introduced around IPL and World Cup became popular because India is a cricket playing nation. As a result, the websites that offer popular Indian card games like Rummy  are bound to get popular. 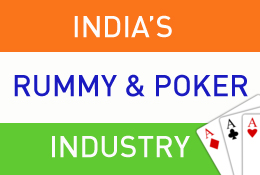 Poker is by far the most played card game in the world and online poker is a multi-billion dollar industry but it is not a very popular card game in India and still remains primarily a game of the west. In India, people are starting to learn poker through some websites that offer online poker and through social apps, available on social networking giant Facebook. Poker (although requires a fair amount of skill), by essence, is a game of chance and involves a lot of luck which is one of the main reasons it is not allowed to play for real money in many countries. However, the popularity of poker in India has increased in the past few years. Most people view it as a means of socializing and recreation. Therefore, quite a few upper-middle class Indians have started hosting weekend poker-evenings with friends and acquaintances. Some view it as an analytical indoor sport and a good-way of spending time rather than going to clubs or parties.

Rummy, on the other hand, is much more popular in India compared to Poker as the people have a much better understanding of the game. The basic objective in every rummy game is to improve the hand by dealing sets of cards and forming a particular sequence adhering to certain rules of the game. While online gambling of any kind is illegal in India, there are a few Rummy sites that allow you to play for cash and are still not breaking the law. This is because a Supreme Court ruling of 1967 states that Rummy cannot be called a game of entire chance and is mainly a game of skill.