Join Poker Grandmasters on Adda52.com to Triple Up Your Winnings with Parlay Bets 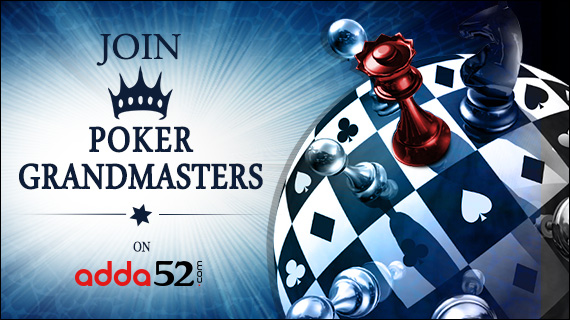 With spring season in, one of the most anticipated poker series-Poker Grandmasters kicks offs today on India’s largest poker site Adda52.com. The newly introduced tournament features Rs. 10 lac GTD along with Parlay Bets, which will allow players to triple up their winnings from this tournament series. Starting today and continuing till 19th February, it will have various interesting formats and variants, catering to different tastes of poker players in India. Get ready to compete with players from all over the country.

To be precise, Poker Grandmasters is an exciting and rewarding tournament with Parlay Bets. Yes, it brings a unique opportunity for the poker players to triple up their winnings with Parlay Bets. The players can guess their estimated final table ranks for all 3 tourneys across the series and share the same with Adda52.com to win exciting prizes. The players who are able to guess their ranks for all 3 tourneys will be given 320% instant bonus of their total winnings across the tournament series, while those who guess their ranks correctly for 2 tourneys will be entitled for 40% instant bonus of their winnings. And the players who guess their ranks correctly for 1 tourney will get 10% instant bonus of their wins. This spring week on Adda52.com is going to be huge in terms of rewards and benefits.

The good thing about Poker Grandmasters is the fact that it has something for every player, as it features various types of tourneys including Knight’s Bounty, Bishop’s 500, and King’s 6.5 Lac. The tournament series opens tonight at 10PM with a special freeze-out event-Knight’s Bounty wherein poker players can enter for a buy-in of Rs. 750+150 and stand their chance win Rs. 100000 in prizes.

Each player will get a starting stack of 7500 and there will be a late registration period till the first 40 minutes of the play. As it is a freeze-out tourney, there will be no re-entry or add-on for players. Tomorrow on 18

Tomorrow on 18th February at 10PM again, the online poker player will have their chance to compete in bigger prize pool tourney of Poker Grandmasters, which is Bishop’s 500. It features a small buy-in of

500 rupees and promises Rs. 250000 lac in prize pool. It will have a late registration period lasting for 35 minutes and the players will get a starting stack of 7500. Unlike Knight’s Bounty, it will be a re-buy event where players will be able to re-buy into the tournament and add more chips at final add-on.

The tournament series will conclude on 19th Feb with its biggest online tourney King’s 6.5Lac, which is a re-enter tournament that kicks off again at 10 PM in the night. But it has the biggest prize pool of Rs. 650000 real cash. This will be a special tourney for players who love intense poker action. The player can enter this exclusive tournament with a normal buy-in of Rs. 3500 and win amazing prize money. Each player will receive a starting stack of 20000 to play. The late registration will be open till 95 minutes.

To the delight of the poker players in India, Adda52.com is also running online satellites to the events in Poker Grandmasters series. The online satellites have been running from 13th of February and will continue through 19th February, which means players can still take a shot at winning tickets to various events of the series. Today, they can compete in Knight’s Deadline Satellites for Rs.75 and win ticket to Knight’s Bounty 500 tournament. On 18th February tomorrow, they can take part in the Bishop’s Deadline Satellites for Rs.50 to win a ticket to Bishop’s 500. On the same day as well as the next day on 19th February, they have a chance to compete in the King’s Deadline Satellites for a buy-in of Rs.350 and stand their chance to win a ticket to another big event, which is King’s 5 lac.

So, play and compete in online satellites to Poker Grandmasters and win exciting prizes ahead!