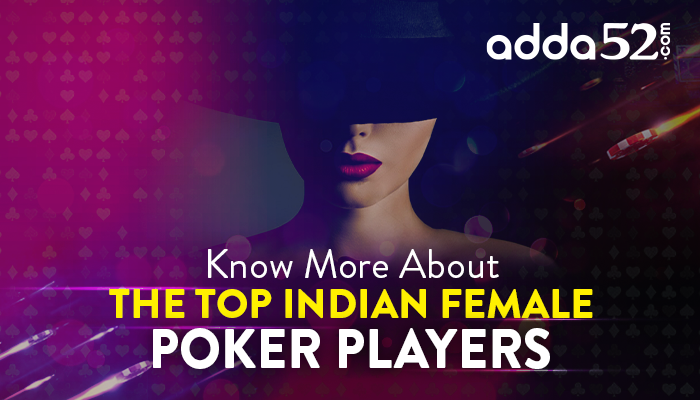 There were times when there was a line of discrimination between men and women. With the advent of time, things have changed and the line has been diminished. There is no field left where women have failed to prove their worth and showcase their excellence. Whether it’s showing exemplary skills in competitive mind sports like poker or cracking a deal with expert marketing skills, women are leaving no stone unturned to lead the race.

Talking about poker, there was a time when the game used to be played by men only. You can also say that men used to rule the world of poker. Back then, women were nowhere in the picture. With the progression of time, women are breaking all the stereotypes and taking the center stage now.

The number of women partaking in poker tournaments has increased dramatically. Men can agree with the fact that their women counterparts are not only giving them a tough competition but also winning the hearts of millions.

More than men, women poker players are showing their interest in taking their game to the next level and honing their skills by learning the advanced gameplay. Without any further ado, we will talk about the female poker players of India who have made the country proud with their impeccable poker skills and inspired everybody by following their dreams:

Nikita Luther: Nikita Luther is known for her impeccable poker skills in the poker industry and celebrated as the top poker players in the country. In 2015, Nikita took the poker circuit by storm by emerging as a winner in the No-Limit Hold’em -Ladies event at IPC in Goa. She has also garnered success by winning at Macau Poker Cup. She has also created history by winning a gold bracelet at The World Series of Poker (WSOP), also called the ‘Olympic gold medal’ of poker, in Las Vegas.

She has committed that initially, she was hesitant to play any type of gambling game. But after getting introduced to online poker, she realized that it’s a math puzzle and became hooked to the game.

Minissha Lamba: Not many people know that Minissha Lamba is a professional poker player and the celebrity poker pro of Adda52 – a leading poker platform. The notable work of this fine Bollywood actress can be seen in popular movies like Yahaan, Bachna Ae Haseeno, Bhoomi, etc. In one of her interviews, Minissha has confessed that initially she was skeptical about playing the game but once she started playing the game, there was no looking back. After playing the game, she experienced a sense of achievement and an adrenaline rush for a hand well played.

Minissha Lamba participated in the World Series of Poker, where she finished 64th out of 1130 players. In 2011, she managed to reach the 4th position at the 15K Kickoff tournament at Indian Poker Championship and also won the Deltin Poker Tournament – Ladies Event. Not only this, but she also participated in the 100K High Roller event of WPT India November 2018 edition held at Deltin Royale Goa where she acquired 2nd position.

Maria Kirloskar: Just like other female poker players, MariaKirloskar also started playing poker for fun but later developed a keen passion for the game and left her corporate job to pursue poker as a profession. In 2015, she participated in Indian Poker Championship events in 2015 and the same year, she managed to get 11th position in the 10k Freeze-Out tournament.

From showcasing impeccable skills on the competitive green tables to exuding a nonchalant attitude of a professional player, Maria Kirloskar is known as a successful poker star to date. She has eyes like a hawk through which she notices every move and pattern of her opponents’ and takes an action accordingly. It has been stated that she spends nearly 30 hours a week indulging in her passion and grasping new skills and knowledge with every game. She believes that she still has a long way to go.

Muskan Sethi: Muskan Sethi is a popular female poker player and among the 100 most influential Indian women to receive honors from the President of India. Apart from being a professional poker player, she also works for an NGO. She is known for utilizing her poker winning for social causes. Muskan Sethi started playing poker when she was only 20 years old on Facebook for fun. After discovering her potential and skills, she realized that she is meant for it. Her consistent winnings encouraged her to take poker seriously and she started partaking in online poker tournaments.

Muskan has received mentorship from American professional poker player Faraz Jaka. She participated in Shark Cage – a popular British television show in 2014 – the turning point of her career. She has participated in various national and international poker tournaments such as WPT, DPT, EPT, and WSOP.

As mentioned above, she was honored by the President of India with a ‘First Ladies’ award, recognizing her achievement as the first female professional poker player of the country. Also, she has been appointed as India’s Responsible Gaming Ambassador.

Shuchi Chamaria Agarwal: Shuchi Agarwal, who hails from a prominent industrialist family background, has been creating a stir in the world of poker. Shuchi started taking interest in poker after her marriage to one of the most renowned poker players of India – Aditya Aggarwal. Yes, she is the wife of poker pro-Aditya Agarwal! The poker success of his husband inspired and motivated her to learn the game and participate in the poker tournaments. After receiving guidance from her husband, Shuchi stepped into the exciting world of poker.

With her massive victories and winnings, she proved her skills time and again. She has been diligently been working on her game and has already established her name in the Kolkata cash game circuit.

Deepanshi Tomar: Deepanshi Tomar, a professional poker player, has managed to shine in the world of poker and has earned more than ₹10 lakhs since 2018 by playing poker. She has not only reached heights only in poker but also made strides in the corporate world as a marketing expert. Delhi’s Deepanshi Tomar managed to reach 12th position in the Indian Poker Championship 10K Kick-Off tournament.

Kanchan Sharma: Kanchan Sharma, a notable name in the world of poker, was introduced to poker when she was working as a Learning Designer in 2017. Thrilled by the intrinsic nature of the game, Kanchan decided to quit her conventional career option to pursue poker as a full-time career. Her recorded online winnings of more than ₹93.88 lakhs are sufficient to prove that she has made the right decision for her career.

Besides her dedication and hard work, one of the main reasons for Kanchan’s success is the strong support of her family. Especially her mother, who had played an important role in supporting her daughter to keep learning and getting better in the game.

The increasing participation of women in live poker games and online tournaments has shot up the influence of women in the world of sports. It is quite apparent that the sports industry is turning its tables to a new and more exciting perspective now.

Reasons why poker is becoming popular among women:

So, what is the reason behind the increasing number of female poker players? Why are more and more women taking up poker as a career in India? Is it just a temporary wave or permanent enthusiasm?

To understand this better, let’s shed some light on some of the key reasons why Indian women are achieving success at the poker tables, both on domestic and international platforms:

Poker Games More Accessible Than Ever

There were times when poker was only restricted to physical poker rooms and live casinos located at exotic locations like Goa, Las Vegas, etc. Technology has surpassed all the barriers and made the game accessible for everyone. Nowadays, there are a lot of online poker sites and apps where players can easily play the game in the comfort of their homes.

There is no need to take out time to pay a visit to the brick-and-mortar casinos and spend a lot of money to hone poker skills. There are lots of online poker rooms available for both men and women to partake in online poker tournaments from the comfort of their homes and offices. This changed the entire picture of poker in India.

You can also say that the market for both online and live poker is expanding like never before. The day is not far away when India would be called the hub for professional poker games.

The association of poker with the gambling industry has refrained many potential female players to take it up as a profession and explore their skills. With the rising awareness of poker as a skill-based game, more and more players are showing their interest in playing poker games and enjoying its mental arithmetic.

After the game was being appreciated as a ‘mind sport’, things changed completely. Even prestigious organizations and celebrated personalities come together to appreciate poker as a game of skill. The promotion of poker as a ‘skill-based game’ on various social media platforms such as YouTube, Facebook, Twitter, LinkedIn, Instagram, etc. encourages players to change their old mindset.

A rise in the Number of Celebrity Female Players

Of late, many leading actresses and businessmen started taking interest in poker games and showing up for national and international poker events. For instance, Adda52.com – one of the leading poker sites of India grabbed headlines for associating with the Bollywood actress Minissha Lamba as its first celebrity pro.

This has also inspired other female players to break the existing norms and prove their expertise in mind games like poker and changing the scenario that poker is only meant for men.

The reason why we are seeing a dramatic change in the picture is that both players and poker platforms are coming forward to support female poker players. Male poker players are welcoming and warm towards their female counterparts. Not only have they been treating female players with respect, but also providing them with advanced tips and tricks to better their game.

This is a key reason for the increasing participation of women in live and online poker events.

Nowadays, there are special Ladies Events hosted by leading gaming platforms to encourage more female poker players across the world.

More than a thrilling game option, poker is emerging to be a profitable pastime for female players. It is the best way to make the most out of your time and fuel your quest of enhancing your analytical and decision-making abilities.

Many women in India have been pursuing poker as a full-time professional, earning a massive name and fame, and reaching the upper echelons.