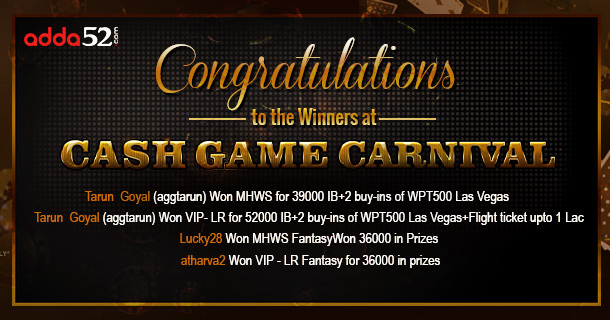 The highly anticipated Cash Game Carnival Season 5 at Adda52 kicked off in a thundering fashion with hundreds of players from various parts of India joining in the Carnival running from 11th April to 27th April. The poker fiesta had a whopping 20 lacs in total prize money and featured some exciting promotions, including Max Hands Won, VIP Loyalty Race Series, VIP LRS Fantasy and VIP LRS Fantasy.

After a gruelling action of 18 days, Cash Game Carnival Season 5 concluded yesterday with some interesting highlights. Mentioned below are some biggest winners across various cash promotions:

The big season 5 of the Cash Game Carnival on Adda52.com kicked off in style with Max Hands Won Series (MHWS) which took place from 11th-26th April and drew a total of 203 entrants. Eventually, it was none other than the well-known Tarun Goyal (aggtarun) who emerged the ultimate winner after scoring the highest 7120 points. Tarun won 39000 in the top prize along with 2 buy-ins of WPT500 Las Vegas, which is taking place 27 the June to 6th July at the luxurious Aria Resort & Casino in Las Vegas. In this series, the online grinder jimmer finished runner-up with 3504 points for 24750 in prize money. In total, 27 players were paid out with a minimum of 900 instant bonus going to PrawnDumpling.

VIP Loyalty Race running from 11th to 26th April attracted a total of 203 entries and again it was Tarun Goyal (aggtarun) who topped the chart with 6343420 points. mitarachi89 and pokemon13 finished as 1st and 2nd runner-ups. The winner Tarun won 52000 IB along with the coveted 2 buy-ins of WPT500 Las Vegas+Flight ticket upto 1 Lac. mitarachi89 who finished in 2nd place with 2509649 points was awarded 33000 IB in the second place prize along with 2 buy-ins of WPT 500 Las Vegas. In this game, the online grinder pokemon13 ended up standing at the 3rd place with 2422127 points. He won 25000 IB along with 1 buy-in to play the prestigious WPT 500 Las Vegas. In total, 27 online players were paid out of 203 entrants into this event with minimum prize money of 1200 going to himanshu_s.

The Cash Game Carnival Season 5 also featured Max Hand Won Series (MHWS) Fantasy where a total of 87 teams took to the virtual felts and ultimately Lucky28 came on to the top, winning 36000 in the top prize money. The top 4 teams out of 87 teams were paid out of 100,000 in the total prize pool. The team sid11 won 20000 in prize money for their 2nd place finish, while nooooopp claimed 14400 for finishing in 3rd place. The team money1 ended up with 9600 in prize money for their 4th place finish.

The VIP Loyalty Race Fantasy at the Cash Game Carnival Season 5 drew a total of 74 teams of which the top 4 teams were paid out of 100,000 in the prize pool. The team atharva2 came on to the top and won 36000- the first place prize. The team asasdc battled it hard but ended up furnishing in 2nd place for 20000 in the prize money. The team that came 3rd and won 14400 in prize money was hghg nnxnx. Following this team was booom team finishing 3rd for 9600- the 3rd place prize money.