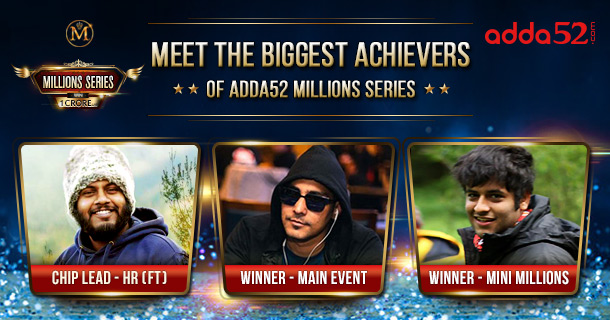 The biggest online tournament festival on Adda52.com this month was Adda52 Millions Series which took place from 26th to 31st July over the course of 6 days. The series guaranteed a mammoth INR 1 Crore across 44 exciting events in varied interesting formats and variants. The impressive turnouts across each day in the series led to 4035 entries, thus creating a whopping INR 10141008 in total prizepool which was distributed to the winners and ITM players across 44 events in the series.

Needless to say, most tournaments comfortably crushed their respective guarantees and in the process gave away some incredibly huge payouts helping players to boost up their bankrolls.

Although Adda52 Millions Series saw so many champions from each event across 6 days of daily action, the biggest winner was Nishant ‘DoJingBULLETS’ Sharma who won a hefty INR 670800 in the top prize money for his grand victory in Adda52 Millions Main Event. The other players who won big included the Mini Millions winner Anik ’ slotmachine’Ajmera who won INR 165000 and Millions Showdown PLO winner Aniket ‘Sandystorm’ Pradhan who won INR 162878. The race for Millions High Roller title still continues with Anujkumar ‘‘thekinganuj’ Kodam leading the final table.

Let’s begin with Adda52 Millions HighRoller chip lead Anuj Kumar Kodam who plays under the ‘thekinganuj’ on Adda52.com. He is the chip lead among final 6 players on the final table of the Millions High Roller final table, which will be played in Goa and will be live-streamed via social media channels. The Millions High Roller took place on 28th July on Adda52.com and attracted a total of 77 entries. After several hours of massive action, the final table was reached and it was Anujkumar who eventually emerged as the chip lead with 934,432 in chips. He is followed by Ankush ‘ invincible29’ Prasad on 2nd place with 401,007 chips. Sitting on 3rd place is Pulkit ‘championplayer’ Goyal. The 6 finalists in Millions High Roller final table are guaranteed hefty prize money. The eventual winner gets more than INR 6 lakhs, while the runner-up would receive more than the prize money of INR 3 lakhs.

The next event on Adda52 Millions Series was Mini Millions, which featured INR 10 Lacs in guarantee for a buy-in of INR 5000. It took place on the Saturday night of 29th July and attracted 172 unique along with 45 re-entries. After several hours of fierce battles, the man who emerged the winner was Anik Ajmera who plays under his online name ‘ slotmachine’ on Adda52.com. He defeated the experienced online player Shyamrag ‘p0kerGuru’ Charuvil in heads-up battle to take down the title for INR 260000. Shyamrag settled down for INR 165000 for making a runner-up finish in this tourney.

Last hand of the tournament took place with blinds running 15000/30000 and an ante of 4000. Anik ‘ slotmachine’ Ajmera opened the action by moving all-in from the small blind blind and Shyamrag ‘p0kerGuru’ Charuvil in the big blind made the snap call. Anik turned over 2♣-A♣ and Shyamrag tabled K♥-J♦. The board ran out 7♠-5♣-J♥-A♥-8♦, giving Anik top pair of aces to win the Mini Millions title.

The biggest tourney on the schedule was Adda52 Millions Main Event wherein India’s well-known poker player Nishant Sharma from Mumbai who plays under ‘DoJingBULLETS’ emerged the winner. For his remarkable victory, Nishant won a hefty INR 670800. He defeated Davinder Pal who plays under “radford”. The main event was tremendously successful and drew 258 entries, taking the prizepool to INR 2580000, which was shared among the top 27 players with min-cash INR 15480.

The last hand of the tournament happened with blinds running 40000/ 80000 and an ante of 8000. After both players posted their blinds, the action began with Nishant ‘DoJingBULLETS’Sharma in the small blind who raised to 120000 and Davinder ‘radford’ Pal in the big blind moved all-in for 2893563 in chips. Nishant thought for a while and made the call. At showdown, Nishant turned over A♣-10♠ and Davinder 10♦-4♦. The board ran out 5♦-10♥-3♦-Q♣-10♣. Both players got trips, but Nishant won the coveted title with higher kicker. While Nishant earned INR 670800 for his top performance in the event, Davinder settled down for 2nd place prize money of INR 425700 for his runner-up finish.

Adda52 Millions Series concluded on 31st July,with its biggest event of the day Millions Showdown PLO, a special PLO event that featured a buy-in of INR 5000 and gauranteed a total of INR 5 Lacs in the prizepool. The Mini Millions drew 84 unique entries plus 43 re-entries and outlasting them in the end was Aniket ‘Sandystorm’ Pradhan. He defeated Amit ‘Amit030’ Kumar Meena in heads-up battle to take down the title. For his grand win, he won INR 162878, while Aniket settled down for INR 102870.

The last hand of the Millions Showdown PLO happened with blinds running 10,000/20,000 and an ante of 2000. The action started with the small blind ‘sandystorm’ called big blind from ‘amit030’. The action folded back to amit030 who raised to 44000, which was called by sandystorm to see the flop 2♦-2♥-5♥. On the flop, amit030 raised to 66000, which was re-raised by sandystorm. The action folded back to the original raiser amit030 who moved all-in and was called by his opponent sandystorm.

The turn and river cards were 2♠ and 9♣. Sandystorm took down the event with a winning Full House. A total of 15 players made it to the money in this tournament with min-cash remaining INR 7144.

Adda52 congratulates all the winners and ITM players in Adda52 Millions Series and wishes them good luck for future events and tournaments. Watch out right here for our updates on next events.