While the technological developments are on the peak, India is emerging as one of the top destinations for those who want to establish themselves in the online gaming space. With over 919.2 Million mobile users (2011-12), India tops the list of world’s largest & fastest growing mobile gaming markets.

Though there has been many factors that have been providing an anticipated boost to the mobile gaming market like increasing percentage of young population, proliferation of young minds that gets readily attracted towards games etc. but the introduction of smartphones, expanding 3G user-base, and technically enhanced games are the major driving factors that are propelling the highly untapped Indian mobile gaming industry. 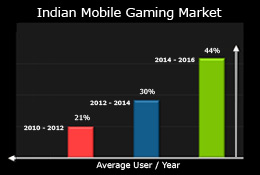 With rising number of online games, mobile gaming industry has also grown tremendously in the past few years which is almost four times as compared to the figures of 2007-2011. As per a survey, it has been observed that more than 50% of the mobile internet traffic and paid content revenues come from smartphones. Beside this, the newly introduced feature phones will also continue to play the key role while maintain a substantial market share.

The reports of the survey also highlights that the Indian market for mobile games and applications is expected to grow up to INR 2,700-crore (approx.) by 2016 which means that if everything goes well, the mobile gaming industry is expected to grow at a CAGR (Compound Annual Growth Rate) of about 43%. Usually, the Indian content landscapes on mobile phones has been categorized into five segments – cricket, music, news, video and games & the “Game” segment leads at third position in the list.

Hence, these figures are enough to show that mobile gaming is expected to become the largest segment of the Indian gaming industry in the upcoming years.