Mobile gaming has evolved into a multimillion dollar industry with stakes held by every network operator and application provider in the telecom industry. Today, the handsets are getting more and more advanced. Moreover, with BlackBerry, iPhone and high-end Nokia phones in the market, mobile gaming has become one of the biggest attractions swayed in front of the consumer to make him opt for a particular handset or network over the other.

Now, mobile gaming stands next only to caller tunes and SMS, in terms of revenue generation. As far as the Indian Mobile gaming market is concerned, it is growing in excess of 200% for the past two years and is expected to reach $450 Million by 2012. The penetration of mobile devices is much higher than that of PC and consoles, even if many of those handsets are fairly low-end. But even the lowest end handset has at least one game, and even people normally resistant to technology will master this as easily as calling or texting. With the consumer getting more demanding in terms of the features they expect from their mobile phones, games can only get more sophisticated, helping the industry exceed its share in the India gaming market. 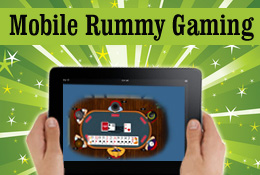 Recent data based on actual usage on a monthly basis shows that users spend close to 10 minutes on any given day playing games on their mobile phones. Though, there are many categories of games that are popular among Indians like Puzzle games, Sports games, games that are inspired by Hollywood, Bollywood & Cricket; the most popular game category remains the Card Games like Rummy and Poker.

Among all mobile card games available today, Rummy is the most played mobile game in India. The reason may be that people have been playing this game since childhood and therefore have a natural liking towards it. Mobile Rummy is so much addictive that people who travel long distances to reach their workplace don’t mind playing Rummy for consecutive 1-2 hours. Mobile Rummy game has many features such as an attractive & vibrant interface, fast play and great background sound that certainly make it worth playing.