Not to Be Discussed

Poker is usually considered a shady & smoky game but in reality, it is pretty much like any other social game. The game not only offers you the potential for financial gain, but also encourages intellectual and social stimulation. A good poker game is not only about the hands being played, but also the joy, atmosphere and conversation at the table throughout the game. However, you need to avoid a few topics that should not be discussed. 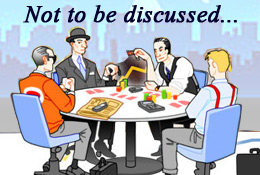