November 2016: Round up of Events – Deltin Poker Tournament Presented by Adda52.com 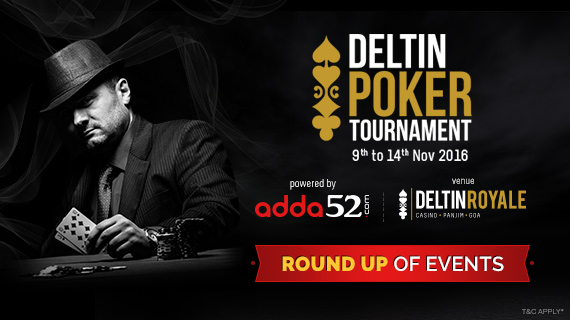 With the increasing popularity of poker in India, any time a major poker tournament comes around, it is no surprise to see that several members of the Indian Poker Community enjoying the action that unfolds in Goa. Thanks to the overwhelming response received by Indian Poker Community in the last two editions of Deltin Poker Tournament that took place in January and August 2016, Adda52.com hosted yet another live tournament series.

As the December edition of DPT concluded on Monday, November 14, let’s look at a glance which player took down which event. “Deltin Poker Tournament Presented by Adda52.com” was a six-day poker carnival that took place at Deltin Royale Casino from 9th – 14th November 2016 wherein players got an opportunity to get their hands on total prize pool of INR 1 Crore.

The series kicked off with an online “5K Warm Up” Event that took place exclusively on www.adda52.com for a buy-in of Rs. 5,000 and a prize pool of Rs.500,000. ‘DoJingBULLETS’ won this online tournament and collected Rs. 2 Lacs in prize money.

The live action began on November 10 with 10K Kickoff event wherein players got an opportunity to grab a share from the prize pool of Rs. 10,00,000. At the showdown, it was Vidwath Shetty who won the battle after knocking out Keshav Chadha in the heads up match. Shetty won Rs.4,30,000 in prize money for the first place finish.

Furthermore, Masood Shaikh won the DPT 10K+5K Bounty title after knocking out the tough field of 160 players and secured Rs. 432,000 in prize money. The tournament series culminated with its concluding event – 15K 6-Max PLO. This event saw the participation of 55 players and was won by Kunal Patni, the member of Adda52 Pro Live. He took home Rs. 252,300 for his first place finish.

Adda52.com congrats all the winners for a wonderful display of skills.

Adda52 to host DPT Xpress Tourney in Sikkim this September