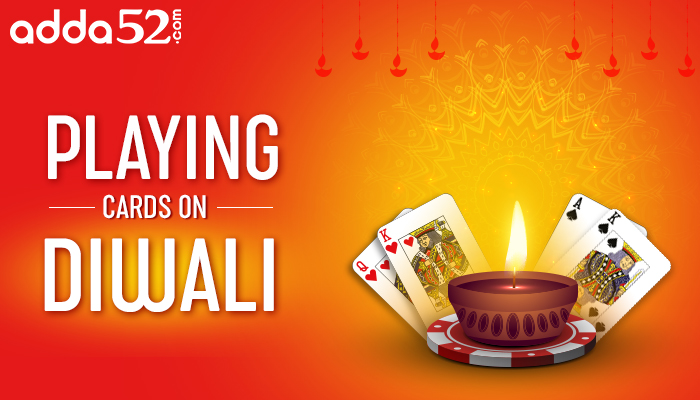 Playing cards is considered very auspicious on Diwali. Goddess Lakshmi, the Goddess of money, wealth and prosperity, is worshipped on this day. Apart from firing crackers, playing cards is the best form of entertainment on Diwali. Often the cards playing will begin after the Lakshmi Puja and last through the night. It is believed that whosoever plays cards on Diwali, Goddess Lakshmi, the goddess of wealth, smiles upon the player and ensures her goodwill upon him.

The tradition of gambling on Diwali also has a legend behind it. It is believed that on this day, Goddess Parvati played dice with Lord Shiva and she declared that whosoever gambled on Diwali night would prosper throughout the ensuing year. This tradition of playing cards mainly Flush (Teen Patti) and Rummy with stakes, on this particular day, continues even today.

There are other additions to the legend that also include the two sons of Goddess Parvati, Ganesh and Kartikeya, playing dice, making it a family affair. Even the gods liked to play games for entertainment. The scene of their playing can be seen in a sculpture at Kailash Temple. Apparently, the one who doesn’t gamble this night would be reborn as a donkey. Now that the vice has been given a social sanction for particularly the Diwali night, the local gambling houses do brisk business during the Diwali week.

In most houses, people invite their friends and relatives, to play Indian card games. If they gamble, stakes are kept very low and children and teenagers are allowed to participate. There is much laughter, eating and friendly banter.

Many do believe that the tradition of playing dice and gambling on Diwali may have started as part of a harvest festival. In this setting, the farmers would have money in their pockets from the sale of the produce. Since the harvest was over and the new planting season yet to begin, there would be time to celebrate with family and friends. In ancient times, dice games were always popular and it seems inevitable they should be included as part of the Diwali celebration. In addition, the festival is much about money, prosperity and hospitality, all things which can be symbolized by playing dice or cards.

Opinions are divided regarding the tradition of gambling during Diwali. Many argue against it as an inappropriate activity in a religious celebration. While others believe it is a part of the general merriment of the holiday and a good way to promote togetherness of family and friends. Since, Diwali is celebrated as the sun passes through Libra (which is represented as balance) playing cards seems an auspicious way to practice balance and moderation.

So, you too can allow yourself to have some fun by playing card games online this Diwali with your kith & kin.