Poker And Adventure Sports – How They Are The Same 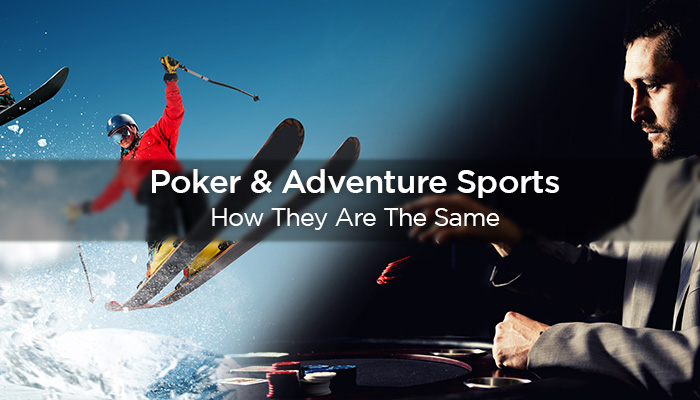 Many people still do not know how to classify online poker correctly. Is it gambling? Is it a sport? We are sure you may have met diverse opinion when it came to this popular card game.

Supporters of poker and players treat it like an adventure sport, while opponents of poker believe that it is a game of chance. We definitely opt for the first classification. In today’s article, we will present why poker is a sport in the purest form and point out the similarities between poker and adventure sports.

Why did poker use to have a bad opinion?

Why did people have a bad opinion about poker sometime ago? Well, the problem did not lie in the fact that some players won and some lost. It is the same as in sport. One has to win, and one has to lose, both in poker and in sport. The bad opinion rather came from the result of how poker was presented to the public opinion for many years.

Poker appeared in many Hollywood and Bollywood movies, where we have seen dangerous-looking gangsters and goons hosting it in shady casinos to lure people and extract money from them. This is the main reason why some people treat the game negatively, and we cannot blame them. Luckily, we live in times when more and more Indian players are beginning to treat poker as a competitive sport.

Poker is not luck, but skills

Skills, mathematics knowledge, analytic approach, and psychology are definitely critical in poker. After all, it is not without a reason why we have professional poker players who regularly earn money during all kinds of tournaments. It clearly shows that in poker, just like in adventurous sports, luck can help you and you sometimes win, but without developed skills, you do not have any chance to achieve long-term success.

Many people assume that if something is not physical and does not require a lot of movement, it is not a sport. However, it is difficult to treat this mere weak argument seriously. Sport is about competition and your ability to use skills and defeat an opponent, not about kicking, running, or hitting the ball with a bat.

Knowing how to play poker has many similarities to sports such as risk, rewards, psychological warfare, playing under pressure, and competition. It also attracts people in front of televisions. Maybe not in the same number as Football World Cup, but still poker thrives on TV broadcasts.

Here we may surprise you a bit, but it is hard to find any other kind of sport that is more psychologically demanding than poker.  Have you ever thought how tough mentally you have to be to play poker cash games and tournaments? You can play perfectly, but one unlucky card or one mistake can decide that you lost both your precious time and money. You need to be entirely focused as you cannot afford to miss even the smallest change in batting pattern or behavior of your opponent. Many professional poker players keep saying, “You can’t control luck, but you can control how you react to bad luck.” You can hear this advice from world-class athletes as well, so this shows how poker and adventure sports are similar to each other.

It is a fact that a professional poker player has to deal with more pressure than athletes. The player does not get a fixed salary and he risks his own money to play. Which athlete can play all day, all week and return home with less money than when he started? There is enormous stress that most of the other athletes do not experience. The exceptions are golfers and tennis players, who also earn by winning.

Interestingly, many former athletes love poker. They say that thanks to poker, they can still compete and feel the rush of adrenaline as in other sports. Boris Becker, Carl Froch, Richard Seymour, Ronaldo, Paul Pierce, James Blake, Pete Sampras – are some famous sportsmen whom you can meet in live poker tournaments around the world.