Poker tournaments are one of those prestigious events which are not only aimed at fun & enjoyment but also involve an element of charity. Charity poker tournaments are often organized with a motive of raising money for some noble cause. Players buy-in to the events just like as they do for a regular poker tournament with any cash prize pool. Some of the fund is then collected from players which is further donated to charity, whereas another amount is set aside for prize pool.

At such charity tournaments, sometimes the winner’s prize may not be a cash prize. It could be a material thing. Still many players opt to buy-in for the tournament, even after knowing that most of the money contributed by them will be donated to a charity and that is what makes these tournaments more special. Such tourneys & their participants are truly admirable & symbol of humanity. 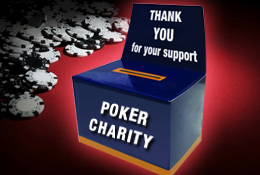 In some cases, players’ buy-in amount is matched up by the event hosting organization. The total amount of fund contributed by the players is calculated and the host company donates the same amount along with all the funds. There are many organizations which host offline as well as online poker charity tournaments. Some of the popular organizations are –