Card games have always been a craze among youngsters specially when it comes to poker, no one can resist this skill game – be it online or offline.

Adda52.com, India’s largest online poker site has always tried to promote this intellectual game. With an aim to spread poker awareness among the youth, adda52 has tied up with Indian Ivy League Colleges to host poker freerolls. This is not the first time when adda52 has come up with such campaign, earlier in 2013, team adda52 hosted many poker promotions in IIM-Lucknow and IIT-Indore which were quite successful. 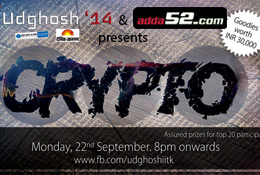 Adda52 organized its freeroll poker tournaments at IIT- Kanpur from 26th-28th Sep. 2014 in one of the renowned sports fests of the country, namely – Udghosh. The inter College festival included two freeroll poker tourneys conducted across two days with a combined participation of 250 players. The tourneys were structured for students as one of the gaming activities to test their intelligence and patience. The prize pool included goodies worth INR 40,000 (including Amazon gift vouchers & Adda52 bonus vouchers) to be won by top 20 players. Beside this, all participants were rewarded with adda52 vouchers worth Rs. 100 and Rs. 250 along with the certificates and poker decks for their enthusiasm & active participation. The winners were also given exclusive trophies to encourage their passion for poker.

Soon adda52 will be hosting another poker awareness campaign at IIT-Delhi wherein there will be prize pool of goodies worth Rs. 2 lacs. The poker events will be organized in association with the very popular College Fest of ‘Rendezvous’ that will take place on 17th and 18th October. The fest will feature an All Night Poker Championship and is expected to cross 200 players in participation.

Next this poker carnival will take off for BITS Pilani (Birla Goa Campus) on 1st and 2nd November where a similar poker freeroll will be organized. Come & join this carnival to promote this game of skill in India.