Popular Card Games in India – Know it before you play! 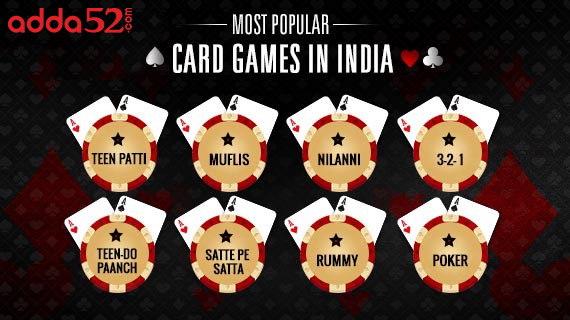 The origin of card games in India can be traced to the beginning of the Mughal rule in the country.  Card games, in medieval India, were taken to be a sole privilege or luxury of the royal class. In modern times, card games have become immensely popular all over the world, especially among youngsters who have found a new interest in these games.

Most popular games are played for leisure as well as to earn monetary benefits in the country. Poker game and Rummy game  are available in cash games and tournament formats online and offline which you can join with real money and make good profits.

Here you can find the best most popular game in India, you can enjoy playing the most exciting variant of card games – Poker.

The game that does not require any introduction! Poker is undoubtedly one of the most popular card games in India. It is exciting, face-paced, and easy to learn. Moreover, it provides a lot of opportunities to hone your mental abilities.

Poker is a strategy-based game which requires focus, determination, patience, and the ability to make quick decisions. A good understanding of mathematics and probably concepts also improves your possibility of winning the game. Adda52 hosts all popular variants of poker such as Texas Hold’em, Omaha, Hold’em ++, Crazy Pineapple, etc which are available 24×7 to play in cash games and tournament formats. If you don’t know how to play poker, a multitude of blogs and video tutorials are available to help you learn the basics of the game. Adda52 also hosts freeroll games that you can join without spending anything from your pockets to earn the practical experience of playing at a poker table.

Poker and other games like Rummy, Donkey, Judgment, and 7 on 7 can be played with any number of players. Twenty-nine is played with 4 people but with a pack of thirty-two cards. Teen Patti, also known as ‘Flush” is a popular poker game variant which is quite similar to the British card game Three Card Brag. Judgment is a different version of the internationally acclaimed game Oh Hell. Court Piece is a game based on partnerships.

Regional Games
There are certain games which are specific to certain geographical territories. A refined card game named Literature, which belongs to the Quartet group of games is played in Kerala and Tamil Nadu. In western India, a trick-taking game called Mendikot is played where the objective is to capture the tens of each suit. Another game where the players need to capture tens is called Dehla Pakkad played in Northern India. Seep, or Sweep as it is more popularly called, is a betting-related fishing game and is quite famous in the Northern parts of the country.

Thus most games played in India have their international counterparts as well. Though it is difficult to tell if the world took it from India or if India took it from the outer world, still  card games in India have a charm of their own

Previous articleCard Playing In India
Next articleHow to Play Michigan Rummy – The Game, The Rules