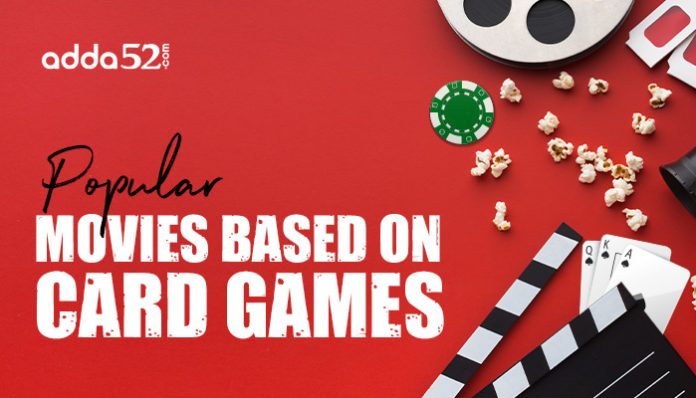 Card games, particularly poker, have been featured in many movies and have often played a central role in the plot. In some cases, the movie may focus on the strategy and skills involved in the game, while in others it may use the game as a backdrop for a larger story. Card games can be portrayed in a variety of ways in movies, ranging from dramatic and intense to lighthearted and comedic.

One common theme in movies that feature card games is the risks and rewards associated with them. Many movies about card games explore the psychological aspects of the game and the psychological pressure that players can face, particularly in high-stakes games. Card games are also used as a way to bring characters together and explore their relationships, as well as to reveal their personalities and motivations.

There are many popular movies that are based on card games. Some examples include:

“Rounders” – This movie follows the story of a young man who is a talented poker player and must use his skills to win back money that he owes to a mobster.

It is a popular movie about poker that was released in 1998. The movie follows the story of Mike, a young man who is a talented poker player but has given up the game to focus on his studies. However, when his friend is released from prison and gets into trouble with a mobster, Mike must return to the poker world and use his skills to try to win back the money that his friend owes. The movie features a star-studded cast, including Matt Damon, Edward Norton, and John Malkovich, and is known for its portrayal of the high-stakes world of poker.

“21” – This movie is based on the true story of a group of MIT students who used their skills in card counting to win millions at blackjack in Las Vegas.

The film does not feature poker, but rather focuses on the use of mathematical skills and strategy to win at the game of blackjack.

“The Cincinnati Kid” – This movie is a classic tale of a young poker player who takes on the best player in the world in a high-stakes game.

This movie is a 1965 film about a young poker player who seeks to establish himself as the best in the world by challenging the reigning champion, “The Man.” The film is set in New Orleans in the 1930s and follows the Kid as he tries to win a high-stakes poker game against the Man. The movie features several poker scenes, including a climactic final hand in which the Kid and the Man go head-to-head in a game of stud poker. The film is considered a classic in the poker community and is known for its realistic depiction of the game.

“Casino Royale” – This James Bond movie features a high-stakes poker game as the main plot point, with Bond facing off against the villainous Le Chiffre.

In this 2006 film, Bond (played by Daniel Craig) plays a high-stakes poker game against the villain, Le Chiffre, in order to bankrupt him and foil his plans. The poker game in the film is a Texas hold’em tournament, and it takes place at the Casino Royale in Montenegro. The film features several intense poker hands, including one in which Bond goes all-in with a straight flush, only to be beaten by Le Chiffre’s full house. The poker scenes in the film were well-received by audiences and critics alike and helped to popularise Texas hold’em in the public consciousness.

“Lucky You” – This movie follows the story of a talented young poker player who must navigate the cutthroat world of professional poker as he tries to win a big tournament.

This 2007 film is about a young poker player named Huck Cheever (played by Eric Bana) who tries to win the World Series of Poker in order to prove himself to his estranged father, a legendary poker player. The film is set in Las Vegas and features several poker scenes, including a climactic final hand in which Huck goes head-to-head with his father in a high-stakes game of no-limit Texas hold’em. The film was not a critical or commercial success, but it did receive some praise for its realistic depiction of the world of professional poker.

Movies based on card games inspire people by showcasing the perseverance, determination, and hard work of the characters on screen. These movies feature storylines in which the main character overcomes challenges and adversity on their way to achieving their goals.

Poker is a game that requires players to make strategic decisions based on incomplete information, and this skill can be applicable in other areas of life. Poker teaches players to make decisions under pressure, to think critically and analytically, and to manage risk. It is a perfect game for those who love challenges and want to showcase their talent in front of the world.