Rummy in all of its forms seems to have become one of the hottest tickets around. Rummy 500 like all the other variations of this game has a past steeped in theory and misinformation. The fact is no one knows where the game originated but what we do know is that it is as popular now as it has been in the past.

The game was described in detail in 1800’s in one of the early editions of the Standard Hoyle. Different people subscribe to different theories. We will give you a synopsis of the most popular ones. 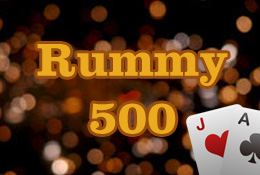 This revolves around the Chinese card game known as Mahjong; this game later came to be known as Kun p’ai. The game was much like rummy with sets and sequences being the scoring medium. When the game Kun P’ai was introduced in Britain it underwent another name change. The name it got in Britain sounded a lot like ConQuian. This may be the origin of both games.

The Poker Theory
The way poker and rummy are played are very similar indeed. Look at it, the hands in poker include 3-4 of a kind as well as the straights, straights are sequences. The general vein of thought when it comes to rummy evolving from poker is that it started with a game called ‘Whiskey’ or ‘Rum Poker’ ; gradually it came to be known as ‘Rum’ and eventually ‘Rummy’, i.e. the game we know today.

The Conquian Theory
Now this theory has always met with a lot of opposing views. Now people believed that it was from the game Conquian that rummy got its start but they cannot agree if the original game is of native America through the Apaches or if the Spanish conquistadors left it as a remnant of their time in America by way of Mexico. There are records to support the Apache theory but again the game is said to be taken to Britain and the name changed to something similar to what we have today.

Popularity of Rummy 500
Rummy 500 is popular all across America and some version of it is played in countries around the world. Rummy 500 has the distinction of being a game where the points after each round are tallied to provide a score that leads to a target. The game can be played by up to 8 players but it gets a bit crowded. The best games stick to 3-5 players.

Previous articlePlay Games & Have Fun at Adda52.com
Next articleRummy 500 – How to Play & Rules