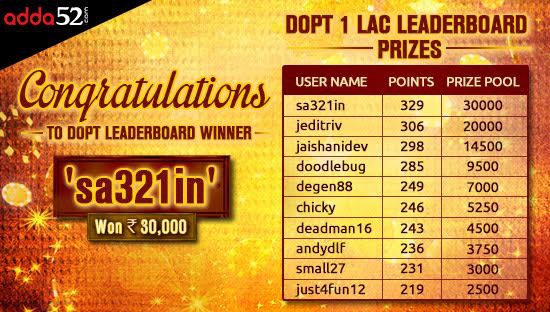 The recently concluded Deltin Poker Tournament (DOPT) on Adda52.com saw amazing turnouts and massive prize pools being awarded across the 5-day series. One of the key attractions of the series was the chance to compete on the 1 Lac DOPT Leaderboard where earning points and finishing among top 10 players meant winning a share of 1 Lac prize money on the Leaderboard. The series attracted more than 1000, but the man who topped the leaderboard was sa321in. He made several in the money finishes across various DOPT tournaments and was awarded with 30000 in prize money.

A well-known online player, sa321in performed well all across DOPT series and got 329 LB points to propel him to the top spot on the Leaderboard. Trailing him was jeditriv with 306 LB points and he was awarded with 20000 in prize money for his runner-up finish. Following jeditriv on the leaderboard were jaishanidev on 4th spot with 298 points and doodlebug on 5th spot with 285 points. The 1 lac leaderboard prize money distributed to the top 10 players was an instant bonus from Adda52.com.

Congratulations to all the winners on the DOPT Leaderboard and good luck for other big tourneys!