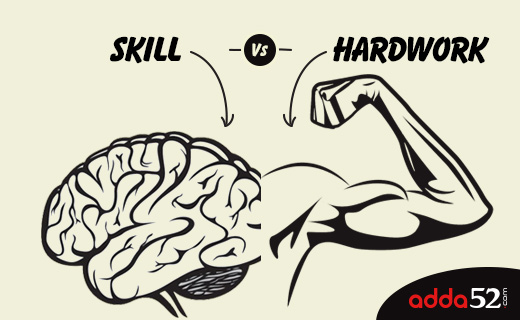 It’s always been a topic of discussion as everyone has a different opinion on this subject. Some feel to master the game of poker one must have only skills and on the other hand some may feel the only handwork can lead to success in the game. It becomes a matter of how to play poker more than what is needed to play poker efficiently.

The game of poker is a wonderful combination of skill and handwork. A person requires necessary skills as well as good amount of handwork to control the game of poker. Anything alone wouldn’t give good results. It is true that the player must be above the threshold of natural ability to be good enough to play poker at high levels. But this fact cannot be ignored that only skill based poker game i.e. players good with numbers, observation skill, has a poker face and ability to understand the opponent have a good chance of winning the game but only when this skill is properly crafted with handwork. Here giving an example of cricketer Sachin Tendulkar, who doesn’t know him and his wonderful skills. However if he didn’t put required efforts and handwork in his game, he wouldn’t have achieved this height.

Same way, handwork without an appropriate skill doesn’t lead to success. When a person thinks of playing the game he finds the game interesting and feels inclined towards the game. Some of his natural ability works as his skill in the game. At times the player may put his 100% into learning the game, does immense handwork but fails to become an effective player. The reason being he lacks the required blend of mind and skills to excel in the game.

A player who plays the game just for fun and is not a regular player has nothing to do with skill or handwork, they just believe in luck. They do not necessarily have any expertise of the game they just wish to get a good winning hand just out of luck. This type of players might be good at the initial stages of the game but wouldn’t last long. Their success is temporary. Never the less this is also true that there is an element of luck but a skilled player knows how to turn that to his advantage.

There was an experiment done taking 200 players. These 200 players were divided into two groups A and B. A group had players with skills and B group had players with handwork. The people conducting the experiment were skewed towards players who apply the skill in poker card game as they felt that skilled players (without handwork) had more chances of winning the game. But to their surprise at the end of the experiment, the result showed that both the groups had equal chances of winning the game of poker. There wasn’t any vast variance between the teams.

So the conclusion is that if we carefully cultivate the natural gift it blossoms much brighter that when it is left alone. To play online poker effectively and avoid poker game mistakes, a player must use their natural skill accompanied by a good amount and right direction of handwork to achieve success…..winning the game of poker.