Suits and their Origin

A deck of playing cards is divided into four classes. Each class is known as a Suit. Every suit is represented through a symbol imprinted on the cards. Origin of Suits can be traced back to Europe in fourteenth century, where they were first introduced with the playing cards during the renaissance. 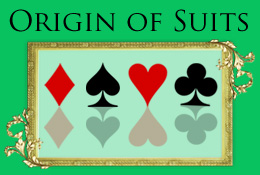 The earliest suits were of Italo-Spanish style or now known as Latin suit system. The four suits in this style were namely;  Cups (Coppe/Copas), Coins (Denari/Oros), Clubs (Bastoni/Bastos) and Swords(Spade/Espadas). As believed by some scholars, these four suits represented the four classes of people in Europe at that time, clergy, merchants, soldiers and farmers.

Next in line were the Germanic style suits. Hearts, Bells, Acorns and Leaves were the four suits in this style.

After the German, the French Suit system followed. This system could be incorporated easily on playing cards and were cheaper in manufacturing, and thus its popularity rose. In the 16th century, they were introduced in the English speaking world. They spread throughout the British Empire and eventually flew to North America where it became immensely popular. Today, they are also known by the name of Anglo-American pattern and are the most popular suit system around the world. Hearts, Spades, Clubs and Diamonds are the four suits in this style.

The Japanese adopted to 48-card deck with four suits. In China and Southeast Asia, the game of Mahjong was introduced with three suits, Coins, Strings and Characters. Today, the 52-card French Style deck is also very popular in Japan and continental Asia.

It is very interesting to know that apart from the common stacks, decks, suits and cards are available in large number of variations, designed specifically to attract regional and foreign card enthusiasts.