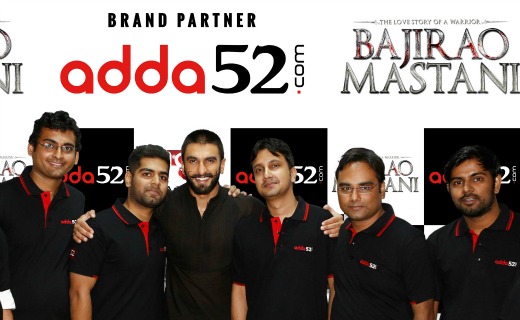 Finally, Bhansali’s dream epic Eros International’s Bajirao Mastani – a historical romance has released and has struck gold in the box office. And with this gold came the ‘dream-come-true’ opportunity for poker players who played-like sharks at adda52.com only to meet their favourite star and the leading male protagonist of Bajirao Mastani : Ranveer Singh.

Directed by Sanjay Leela Bansali, Bajirao Mastani is a historical drama which traces the love story of Bajirao and Mastani starring Ranveer Singh, Deepika Padukone and Priyanka Chopra in the lead roles.

Adda52.com, a brand partner of the movie ‘Bajirao Mastani’ launched an exclusive poker tournament in India on 17th November, the winners of which got a chance to meet the reel Bajirao – Ranveer Singh. While the Bollywood fans were eagerly waiting for the biggest blockbuster movie of the year, Adda52.com made their downtime more dramatic with the Meet Bajirao Mastani Tournament series. The poker players who ‘hit it big’ were amongst those thousands of players from the Indian poker community who participated to get a chance of meeting the reel warrior of the movie Bajirao Mastani.

The winning poker players were flown in from various parts of India by the online gaming site to meet the Bollywood Promising Star at a Meet and Greet event in Mehboob Studios, Mumbai. Prabhat Kumar, Rohit Sinha, Sunny Thadani, Deepak Bothra and Ankit Anand were those who proved their poker mettle to reign across the month long promotion and come out on top to book a trip to meet the Bollywood stalwart.

Prabhat Kumar, one of the poker pros was in seventh heaven as he had left no stone unturned for this event. He said, ‘Thank you team for making me meet superstar Ranveer Singh. I missed my flight and booked another one and it was worth it. I am looking forward to watching the movie more than before,’ said Prabhat about his experience.

Ankit Anand, one of Adda52.com’s regular players was elated after meeting Ranveer Singh and said, “Thank you Adda52.com for giving me this opportunity to meet Ranveer Singh, I am really thankful that such tournaments are organized and players can meet Bollywood celebrities.”

This time again Adda52.com extended its association with Bollywood and assured Indian poker community that it will be hosting such events time and again.

Previous articleArt Or Science
Next articleAdda52.com: The Journey of 2015