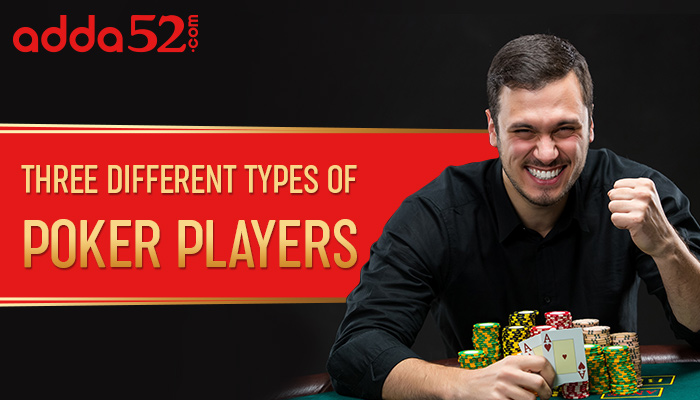 Poker is a dynamic game where you come across a variety of players. If you are an online poker player, try playing live poker games to get better insight about the opponents you come across at the poker table. Whether you are an amateur, you may feel intimidated seeing players wearing hats, sunglasses and mesmerizing clothing but it’s their game playing styles that makes them different. So, you need to focus on their behavioral and game playing traits to know what type of poker player they actually are.

Here is the outline of different types of poker players and how you should play against them.

This is the broadest category of live poker players that encompasses all of the bad players. Some examples of bad players include wild, loose and calling stations. Poker may not be fun if these players are not present. So, beware of them because they cost a lot of money from time to time, but in the end you’ll benefit greatly from their presence. Their playing style will differ depending on their situation- tilt, frustration, or even alcohol. While playing against such players, you should carefully get involved in pots. You should bet with small amounts in order to hit the flop and win a whopping pot. This also reduces the risk involved when playing against the players who rarely fold. Thus, play smartly and place strong value bets to knock out loose and aggressive players.

This category of players is the one that only play aces and kings. Such players sometimes even fold AK to an open raise. These players can be easily identified on the live poker table because they seldom get involved in any pots. And if they get involved, then you need to shield yourself because they have strongest hand on the table. Moreover, tight players are the most disciplined players in the game of live poker. Though they fold most of the hands and do make money playing and winning few hands. To beat a super tight opponent, you should make pre-flop raises. Further, you should continue to bet even if called by such players because they sometimes end up transforming into calling stations.

This is the most common and the extreme category of live poker players. These players bestow themselves as good at poker, and you will find them in large numbers in a live poker room or a casino. These good players bring poker action on the table and can wreak havoc on your win rate. You should avoid challenging their skills them unless you are a better poker player yourself. The way to beat good players is to be confident of your own abilities because then only beat such strong and winning players. Moreover, as they know more of the poker tactics, you have to think of uncommon tricks to beat them.

So, next time when you go to a casino to play card games in India, observe your opponents and try to analyze what type of poker players they actually are.