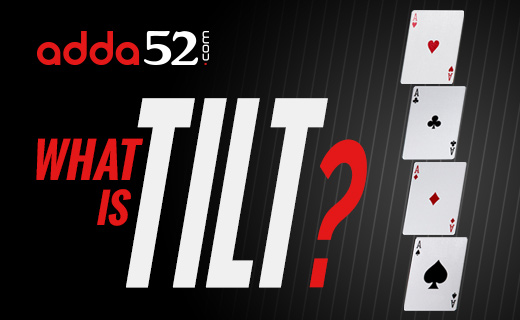 Mind Trip! Psyche! Tilt! Every poker player has experienced it in their poker career, and have not been able to avoid it. Tilt – is the most mysterious and dangerous aspect in the game of poker. Time has come to understand tilt in every manner – reasons for it, dealing with it and consequences related to it.

First, we need to understand what exactly tilt is. Let’s take an example here. ‘A’ is a regular casino goer who plays No Limit Texas Hold’em. ‘A’ usually plays cash games, and for a long time has been experiencing a tough time in poker. He has not hit the draws, lost more coin flips and lost many stronger hands. Time to picture a scene. ‘A’ is playing online poker for about 5 hours now. In these hours, he has experienced many bad run of cards and lost four stacks. Subsequently, ‘A’ wins a bigger pot with A-A, but he five-bet shoves his money in a blind battle with A-9 and loses to Q-Q in the very next hand. ‘A’ ultimate reaction is such that he slams shut the laptop and throws his drink against the wall. In this case, ‘A’ is on tilt. It’s high time for him to take a break from playing poker. This much-needed break is a necessity because it helps a person to start playing poker afresh and with positive mind after a couple of days.

The concept of tilt is as old as poker. Tilt originates from variance. It is because of variance that there exists winning and losing streaks in this game of skill and is not dependent on how to play poker. Situations like one discussed above affect the mental level of players and results in unwanted distraction from the game. The real cause is Tilt. To be a long-run successful poker player, one not only needs good decision making and logical reasoning skills but also mental strength – the most under-rated skill in the game of poker. Did you know poker legend Chip Reese was one of the players known to being immune to tilt? Reese hardly showed any reaction or changed his playing style, no matter how bad things were.

The key thing to master in poker is tilt control. It is that one skill which comes with years of experience as tilt, or emotions, can crop up anytime and mystify your senses. Tilt not only arises because of downswing or a bad beat. Situations like financial crisis, strained family relationships, fight with an opponent, etc are other reasons that trigger tilt. So, tilt is not a game specific issue, it’s a general issue. Suppose ‘A’ faced a bad beat, and his immediate reaction to this is anger and as a result he starts playing loose. Or if, ‘A’ had a fight over his drinking with his wife. Now when he sits down to play poker, his bets and makes game decisions which are more emotional instead of rational. In these cases, behavior and emotions dominate the skill part of his game no matter how many other poker rules ‘A’ is following.

Further, tilt not only affects your mind but your body as well. When tilt arises, it takes form of tension, anxiety, fear, etc and these further cause fatigue, unnecessary sweat, tired muscles and increases pulse rate and breathing level. If anytime you face such symptoms while playing poker, then it’s the time to realize that tilt has taken control of your game. Basically, it’s time to take a break. Thus, stand up, take a deep breath, smile and walk around. In short, Relax! This helps dispel negative emotions and pacifies your mind and body.

It’s true that a poker player needs to devote unlimited time and energy to maintain a stable state of mind in order to control tilt. But at the same time, you should not forget that such things are imminent, and it’s better to accept it and move on. Furthermore, you should study why and when you are losing the game as in most of the cases the real reason may be tilt and not bad run of cards or bad luck. Therefore, like a soldier in a battle who cannot destroy his enemies from the roots, always be ready to fight it off because you can never destroy tilt completely. And, over time, you will definitely master tilt like Chip Reese.