Unveiling the Illogical Scenes about poker In Movies 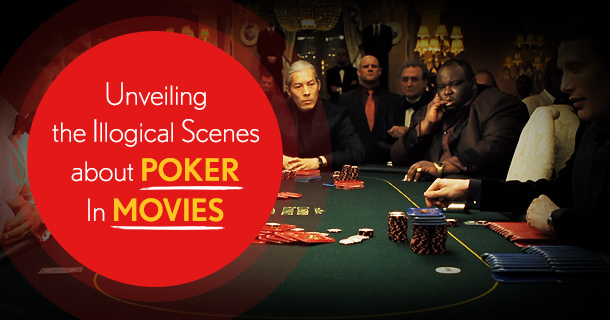 I asked this question to my friend while we were watching “Rounders”for the first time. The dramatic confrontation between Matt Demon and John Malkovich is the most thrilling heads-up battle I have ever seen in a movie. But there is no denying the fact that showing Oreo eating as a tell was a little bit of an exaggeration.

I watch a LOT of movies. Like really, a lot. I love watching Hollywood as well as Bollywood movies. They are my gateway to escape from the real world. Movies taught me that we should not categorize everything into black and white. There are some things in life which can be taken with humor. I am a sucker for the different genres of movies such as comedy, horror, drama, and action movies.

What sometimes I don’t like is how movie-makers stereotype everything. Like many other people, I too feel that movies are far-stretched from the reality. But I am grateful  to Bollywood masala movies which introduced me and brought me closer to my next love – Poker.

I remember the first time I watched someone playing a card game in a movie. It was 1979’s “Kaala Patthar” where in one scene, one of movie’s lead actor Mangal Singh (Shatrughan Sinha) plays “Teen Patti” with other coal laborers. Mangal draws two Kings and a minor card and his opponent shows three Jacks. Following the Bollywood movies’ tradition, Mangal tears down his minor card and declares himself as the third king. Sounds absurd? Well, don’t expect logic!

And how can we forget the “khufia chasma” cheating strategy implemented in every other movie which was 100% successful in finding out the cards the opponent is holding. In 2013’s Race 2, Deepika’s character was wearing shades with the technology to see the card numbers once the players touch their cards. Not only that, she even changed the card numbers using her smartphone in no time. Perhaps her phone was connected to tables via Bluetooth. Who knows?

Movies like Ocean’s 11, Maverick, and Casino Royale showed me how card games are something much more than just a mean of entertainment. I started dreaming about making a dramatic entry in a live poker room wearing a tuxedo like Daniel Craig, sit on a big stake live poker table, and ask for “a Vodka Martini, Shaken not stirred” in a Bond-style.

Movies are for entertainment. Instead of caring about portraying something accurately, the movie majorly focuses on entertainment and keeping the audience on the edge of their seat. Movie-makers use casinos and card playing as a common theme in action movies as they believe that the versatile and intense setting of a casino or a poker room works as a “mise-en-scène” to build suspense or to give a dramatic effect to an action sequence. But the reality is, most of the live poker rooms are sophisticated and highly regulated places. They don’t hire goons to beat players up every chance they get. Cheating in poker is next-to-impossible and cannot be done the way it is shown in the movies. There is no need to dress up like James Bond or Rusty Ryan. A simple smart casual attire is completely acceptable at every game venue.

Poker playing is not my habit. It is my passion. It allows me to face my weaknesses and find out my strengths. Reading the opponent’s mind to find out what he is thinking and how he is going to make his next move is really an alluring feeling which I never experienced before in any other game. I learn something new every time I sit on a poker table. I believe that poker teaches you something extraordinary which even life can’t.

I believe that I am a star of my own life. All the opponents on the table are characters in my life who are here to just serve their purpose. In the worlds of Mangal Singh –

Please mention your favorite movie scenes which you want to add to the list.

“Poker Ka Keeda” is a die hard poker fan. This self-proclaimed poker pundit follows the game religiously and dreams to play a major poker tournament one day. Follow his interesting journey into the world of poker with us.