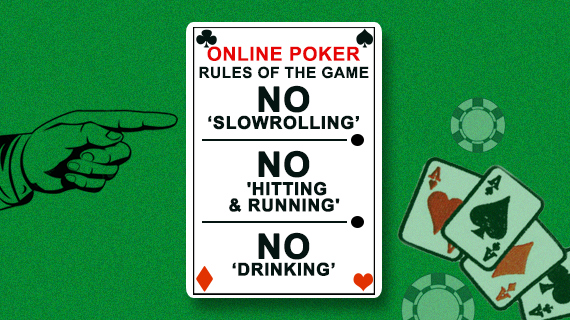 Rules are an integral part of games and sports, and players of every game and sports have to follow certain set of rules. The same applies for skill games like online poker which has its own set of rules. However, there exist specific tactics of poker that are followed as general practice, and at the same time are known to be unwritten rules of the game.

Slowrolling is Never Acceptable
Slowrolling is considered to be one of the biggest breach that a poker player can ever do during the game. Slowrolling means intentionally delaying to turn over the winning hand, and only practice to annoy your opponent.

Never Call Clock on a Player if Not in a Hand
Poker is a game of judgment, and at times you will come across players who need extra time to make an important decision. This extra time taken by your opponent for decision- making should not bother you unless and until you are involved in the hand. Hence, let the players deal with the calling clock if you’re not involved in the hand.

Don’t “Hit & Run”
One of the worst poker actS is to leave the poker table immediately after winning a big hand. It is considered wrong to play the game with this strategy. Such hit and runners are despised by the poker community, and are treated with disregard. In this case, you will also find players who carry out Short-Stacking, that is, these players not only Hit & Run but show up with minimum buy-in and follow a push/fold strategy. In simple words, if they double up on one table, then they will leave that table and shift to play another game on another table with minimum buy-in.

Never Drink while Playing
In a game like poker, you may come across few professional players who have a tendency to win more with a glass of alcohol. But don’t forget, exceptions exist everywhere. It is always advisable to not drink while playing poker, even not under the influence of others, as you will loose those hands that are worthy of wins.

Never Complain, Never Explain
Bad beat happens to all. You may sometime find yourself in a situation when cards may not favor you. That very moment all you need to do is deal with the situation – smile or bite your tongue – but don’t complain about it. Complaining is not the solution to your misfortune, rather it makes you feel worse. Another important thing that you need to keep in mind is not to explain the situation- just forget about it and move on. Though you may have a feeling for the approval of your friends and even strangers on the table, but don’t forget you have not done something wrong. It is not important to justify to others how calculated your raise or call was as nobody at the table has signed up to take poker lessons from you. Instead, you lose much more than you gain.