What Happens In Macau, Doesn’t Stay In Macau – Part 2 By Kunal Patni

In the first part of the Macau Poker Cup (MPC) 22 blog by Kunal Patni, we brought to you excepts from his Main Event Journal. In this edition we bring you the highlights of his 2nd place finish at the HKD 5K event. He came very close to shipping that one and shares the highs and lows to his gameplay. 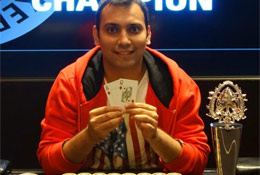 Kunal shares his story here… – Good day for me. We started the final table of the 5k event today and I had a good chip lead at the table and that always is pretty nice. Things didn’t start off too well for me as I lost a pot to a short stack shove in the beginning. AQ < AK. Lost a couple of small pots again after that and came back immediately everything. I remained the chip leader at the table for 90% of the time. Lost a big hand in the middle stages and became less than average.

Immediately after that I was on big blind with K7. Guy from button opened. He had been stealing my blinds for the last 3 orbits and I was irritated. He also knew that I was playing a pretty solid game. I 3 bet him and he tank called. Flop was J and 2 rags. I check raised his bet. He called again. Turn was another rag and I bet 75% of my remaining stack. That’s the only way I could have won the hand as I put him on small pockets. He tanked a lot and folded and I won a big pot again. I showed him my bluff and he was quite upset.

Next hand I got 99 on the small blind. Mid position opened and button called. I called too. Flop was 9 6 7 with two hearts. So a pretty wet board. I checked and the guy who opened raised. Button folded and I re raised. The guy re raised me again and I was very happy and jammed. He tanked a lot. My play was exactly like the last hand and he thought I was bluffing. Tanked for a good ten minutes and he folded and I showed the set. But this was a big hand for me and I was back to chip lead.

People got eliminated soon after and it was 3 of us left with equal stacks. Rajeev Raut from India was also there. We tried to make a deal but the guy from Japan didn’t agree so we continued. After sometime Rajeev was eliminated and this guy had a good chip lead on me heads up. He raised me and I jammed with KQ. He snap called with A9. I got a bit lucky and clipped my Q. We were equal again. After that I upped my aggression and built my stack to 3 times his stack. After sometime he shoved and I had 44. Easy call for me. He had A10. I was on the verge of victory till the run. But the ace on the river saved him. We were nearly equal again. He had a slight lead.

The last hand was quite sick. I raised with JJ and he called. Flop was 842. He checked and I bet. He raised me. I jammed. He snap called and showed me 8 and 10. I showed my jacks and he was shocked. I had him. Or that’s what all of us thought.  Just my luck that he hit his second pair on the river. I was really upset. This was my game and my trophy. Lost it to a sick hand. Took me sometime to get over it. But happy with my overall performance. 2nd is no mean achievement and I got decent payout also. So finally a nice cash in at the Macau tournament.