The April Edition of DPT Begins Tonight with 7K Warm Up on Adda52.com

Finally the wait is over for the highly anticipated April edition of the Deltin Poker Tournament (DPT), which brings a whopping INR 2.25 crores in the total prize pool. The event begins tonight with 7K Warm Up- an online event on Adda52.com at 9:30 PM, which features a prize pool of INR 10,00,000 for a normal buy-in of INR 7000. The live action for the DPT April kicks off tomorrow at India’s largest and most luxurious casino- Deltin Royale Goa with DPT 15K Kickoff, which is a re-entry event and brings up INR 20,00,000 for a buy-in of INR 15,000. The players in this event will get a starting stack of 10,000 (200BB). Also, there will be a late registration period lasting till the end of the first break. 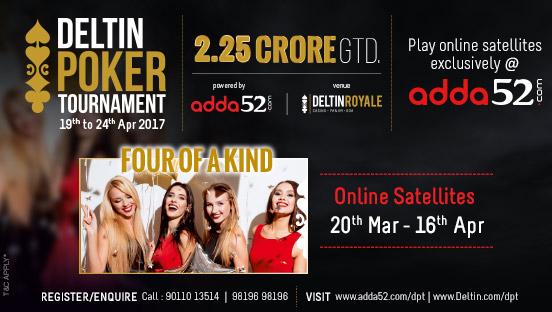 April. The interesting thing about this event is that players who bust on Day1A can re-enter it on Day1B. It will be a freeze-out event with a buy-in of INR 35,000 and a beefy INR 70,00,000 in the prize pool guarantee. In this tournament, the players will get to play a starting stack of 15,000 (300BB) and a late registration period will be allowed till the end of the first break. The Adda52 35K Main Event is followed by 100K High Roller on 22

April, which boasts of the biggest prize pool INR 1 crore in the guarantee. Again, it will be freeze-out tournament wherein players will get to play with a starting stack of 30,000 (300BB). A late registration window for the players arriving late into this tournament will be open till the end of 2

last event of the series that features a buy-in of INR 15K+15K=30,000 for each team, which will comprise  2 players and will pay 1 buy-in & share 1 chip bank. In this tournament, team members will  alternate every level upto level 4. Once level 4 is over, the stacks will be merged. Members will continue alternating every level upto final table from Level 5. Eventually, when the tournaments comes down to 4 players, both team members can remain at the table. The prize pool in this event will be calculated on the number of the teams that enter the event. The first team member will begin the level 1 with 5,000 chips. In case, the first team member is knocked out, he/she will be replaced by the second team member who comes in with the other 5000 chips & plays both the remainder of first level as well as the second level to ensure the order of participation remains consistent in this event.

The April edition of the Deltin Poker Tournament culminates on 24

April with a special 15K PLO tournament, which begins at the usual 7 PM on Monday. The event promises INR 10,00,000 in the prize pool guarantee for a buy-in of INR 15,000. The action in this event promises to be faster and furious, as it will have 2 re-entries allowed and players will get to play with a stack of 10,000 (200BB). Like other DPT events, it will also have a late registration period lasting till the end of the first break.

Join the April edition of the Deltin Poker Tournament and win from a life-changing INR 2.25 IN GTD!