Adda52.com, India’s largest poker site, has officially announced that Nikita Luther will be joining as a member of Adda52 Pro Live. This team is an ultimate combination of experienced players and talented youth featuring Kunal Patni, Amit Jain and Tarun Goyal. Along with other team members, Nikita will now represent India as an Adda52 Live Pro in online and land-based tournaments around the world. 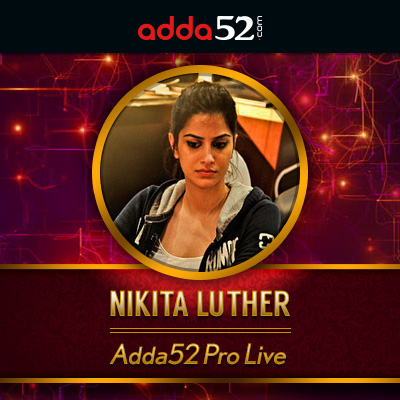 Nikita is one of the most popular Indian woman poker players who discovered her passion for this game while studying in college. She had a talent for numbers since childhood and her affinity aided her in becoming a professional poker player. Playing poker for the last 6 years, Nikita has won the 5k Ladies Finale Event at the India Poker Championship 2015 in Goa, and aspires to win a WSOP bracelet someday.

"Signing Nikita as Adda52 Pro Live is an important step in helping promote the game among the women in India where poker is only just coming to the fore.” says Anuj Gupta, Founder & CEO of Adda52.com, on Nikita’s addition to Adda52 Pro Live Team. He adds, “More importantly, Nikita’s passion for sportifying the game of poker, is in line with our vision as well. ”

On her selection for Adda52 Pro Team, Nikita Luther stated, “It is an absolute honour to be a member of Team Adda52. It is poker’s biggest platform in the country and I can’t wait to start my term with them. I passionately aspire to remove the taboo and ignorance associated with poker.”

This announcement comes soon after adding another player to the team in August this year- Tarun Goyal. Tarun is also another well known face in the Indian poker circuit who started playing poker online on Adda52.com and moved to the live felt. He recently won the 10K Kickoff Event in Deltin Poker Tournament in August.

Adda52.com is a gaming portal owned by Gaussian Networks Pvt Ltd. Gaussian Networks believes in the highest values of business conduct. Adda52 has been certified from iTech labs for fair play and random number generator (RNG). The company has also tied up with multiple banks and payments gateways to process payments of customers. The company also facilitates its users to reach out for any query on e-mail (info@adda52.com) or call (1800-3000-0611, 11AM to 11PM, Mon-Sun).