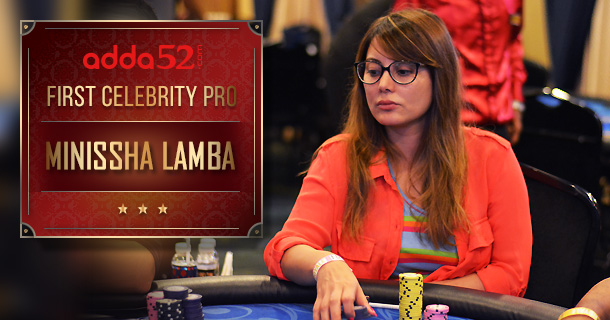 Known for her sizzling performances in several Bollywood films, she was born on 18 January 1985 in a Haryanvi Jat family. A native of the capital city Delhi, she graduated in English (Hons.) from Miranda House, University of Delhi. She initially wanted to be a journalist but her talent and looks took her to Bollywood. While she began her Bollywood career with the film Yahan, her other notable films include Honeymoon Travels Pvt. Ltd., Bachna Ae Haseeno (2008), Well Done Abba (2009), and Bheja Fry 2 (2011). In the year 2014, Lamba featured as one of the contestants on Bigg Boss 8. Her upcoming film is Kannada, a romance thriller to be directed by Sameer Hanchate & released in 2018.

Read More: Know why poker is called a skill based game.

Minissha picked up poker when her friends from abroad introduced her to it. “A couple of my friends had come down from abroad and they were talking about poker. Of course, one knows there’s a game called poker, but I always thought it’s a bit difficult, and told them, ‘I’m pretty dyslexic with numbers and it sounds complicated’.” “But the more they taught me and explained the game to me, the more I felt I could be attracted to it,” said the actress, who still doesn’t consider herself a “pro” at it.

Minissha Lamba is set to add an oomph factor to the world of poker with her stint with Adda52.com, India’s most trusted platform to play card games, as the games offered here are completely legal and have been developed exclusively by industry experts, keeping all level of players from amateurs to the professionals in mind. Her association with the poker site will help to sportify the game as a powerful platform and take it to a next level in India, a country where poker is yet to get the tag of a ‘mind sport’ or ‘skill game’. Her presence will also add a glamour and grace to the mind game of Poker.

For Minissha, this will be the first poker endorsement and she is all set to scorch the felts with his first international poker tournament WPT 500 Aria in Las Vegas as a celebrity pro for Adda52. “Adda52.com has not just provided the Poker players with a great platform to showcase their skill and grow themselves as a player but encouraged people to understand poker as a game of skill and a sport. I am excited to work with the India’s largest poker website and will be representing them in WPT 500 Aria poker tournament soon. I will also be honing my poker skills with Adda52.com and expecting to take my gaming skills to next level with the training provided by them.” said the actress.

Anuj Gupta, Co-founder and CEO of Adda52 expressed the company’s delight, “We are thrilled to have Minissha as our brand ambassador. Her beauty and confidence on the Poker table associates well with everything we wish to exhibit through our website for the online-gaming industry. Abiding by our simple mantra ‘Go Play’. There is a lot of potential for poker in India and we hope to make difference by bringing in well- known poker player and celebrity Minissha Lamba on-board with Adda52.com, the largest poker website.” Anuj feels that Minissha’s passion to sportify poker is in line with their vision of associating with well-known professional poker players from across the country and constantly striving to give opportunities to new talent by grooming their skills in the game.