A.: Yes, Hon. Supreme Court of India in its 1996 ruling has exempted poker from being bracketed in the category of games that are purely chance based. Although, a certain element of luck is involved in the game, but the winner is determined by superiority of skills. A player who conducts himself skilfully during the game and possesses mathematical bent of mind along with experience-driven insights is certainly going to take home the pot.

Q.: Would a loss in the game of poker leave me bankrupt?

A.: Of course not. Such nightmarish rumours have been spread by agencies who feel insecure due to the mammoth popularity poker has commanded within a few years of its official launch in India. At Adda52, we have exclusive provisions in place that have been strategically devised to ward off any monetary disaster the player may land himself in the heat of the moment. The amount of money one can put at stake is monitored and limits set to ensure that one does not go overboard.

Poker has a universal appeal that cuts across demographic barriers. One of the interesting things about Poker is that women, particularly housewives, are taking a greater interest in the game.

Q.: What are the variants of poker that one can play online?

Q.: What skills should one look forward to master in the game of poker?

A.: If you want to make it big in poker, the skills you should essentially focus on are: selection of strategic table and hand, capability to read rival’s hands, assessing the rivals’ abilities, playing heads up, doing bluffs and semi-bluffs, selecting seat, check-raising, getting tells, and calculating pot odds.

Q.: What are the actions a player can undertake when his/ her turn comes on the table?

A.: Once the cards have been dealt out, the opportunity to act is offered to players in a clockwise direction.

‘Check’ is used by player for declining the chance of opening the betting. This option can be availed of only if no betting has been done in the active round and the next player in clockwise sequence would get the chance to bet when passed on.

‘Bet’ implies that any player on the table has opened the game by putting his/ her money at stake and now it is the turn of other players to match the amount by calling for staying in the hand.

‘Fold’ action is initiated by the player to indicate forfeiture of his/ her cards and he/ she would be debarred from acting again or winning in the current hand.

‘Call’ can be invoked by a player once other players in the present hand have betted and he/she has matched the largest bet made on the table.

‘Raise’ is carried out by any player after the rivals in the game have betted. The raising player has to put in a bet that is measuring up to the largest bet made on the table and then make a bet that surpasses the highest bet amount. Remaining players have to call the raise or initiate re-raise for remaining in the hand.

Q.: Are there any betting limits?

A.: In ‘No limit’ game, betting or raising can be done by a player for unlimited amount till it matches the chips’ number possessed by him at a particular point.

In ‘Pot Limit’ game, the ‘bet’ and ‘raise’ scale is limited to the total pot size at any given time.

In ‘Fixed Limit’ game, one can indulge to a limited extent wherein the optimum amount is fixed at the start of the game. 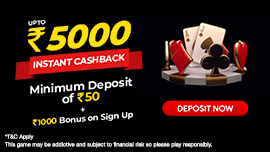