Origin of Card Games in India

Playing cards is a common pastime in the Indian sub-continent. In Hindi, the official language of India, cards are referred to as “Taash”. Many popular card games in India include Rummy, Bluff, Twenty nine, Rang (Court Piece), Bridge etc. However, it is very interesting to know the origin of card games in India. 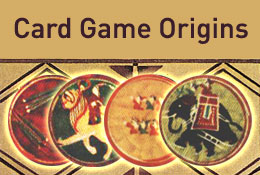 The card games were introduced to India in the 16th century by the Mughal emperors from Central Asia that were fond of the game “Ganjifa”. The name “Ganjifa” evolved from the Persian word for playing cards, ‘ganjifeh’. The first references to the game were found in the biography of Babur, the founder of the Mughal dynasty in India. “Ganjifa” was first introduced as a Court game and was played with lavish sets of cards that were made with various ivory or tortoise shell and were decorated with various precious stones. It was only much later that the game spread to the general people of the country when inexpensive cards were made and sold in the market. These cards were mainly made from palm leaf or wood.

There’s another fable explaining the creation of playing cards in India. It connects cards with royalty and female boredom within King’s chambers. According to a Hindu legend, the wife of an Indian King was bored and irritated by his disgusting habit of constantly pulling hair from his beard. In order to keep his hands occupied and away from his beard and to entertain herself and her husband, the wife conceived the idea of the game which used cards.

Unlike the rectangular shape of the cards used in China and Korea, Indian cards had a round shape. They were made of ivory, paper, wood, cotton fibre, palm leaves etc. Their diameter ranged from 1 ½ to 4 ½ inches. Cards were represented by ten suits, each composed of ten numeric and two court cards. Soldiers, elephants, ships, horses, demons, women etc. can be found among the suits of the cards. The decoration, style and the arrangement of the card sets were always different, depending on the artisan who made the cards. For example, the “Dashavatara” deck of Ganjifa had different designs based on ten different avatars of Lord Vishnu.

Previous articleSuits And Their Origin
Next articlePlaying Cards on Diwali